Advantages of using Ultra Low Carbon (ULC) steels include good formability and a superior surface quality.
Interstitial Free refers to the fact that there are no interstitial solute atoms to strain the solid iron lattice resulting soft pliable materials perfect for a range of applications such as panels in the automotive industry.

Ultra-low carbon (ULC) Interstitial Free (IF) steels have been used as automobile panels since the latter half of the 1980s. This automobile panel material is normally produced by cold rolling and annealing after hot rolling, in which hot rolling is usually finished in the austenite region at the elevated temperature. Many research works have been conducted on the influences of both hot rolling and cold rolling technologies on product properties for ultra-low carbon IF steels (ULC IF). In the last 10 years or more, researchers have paid a great deal of attention to the warm rolling technology (also termed as ferrite rolling technology) of low carbon steels (LC) and ULC IF steels. The new technology has a series of advantages, that is, not only can the strips with better drawing properties be produced with this new technology, but can also directly produce the drawable strips for airmobile by warm rolling. It is reported that automobile strips have been produced by ferrite warm rolling in some countries. The enameling industry can also need this kind of sheet steels with excellent drawability to innovate products. However, the conventional ULC steels cannot satisfy the requirement for enameling because of too much purity and thus poor fishscale resistance.

For enameling use, different alloying elements are added in the steels to form various types of inclusions and precipitates including: (1) cementite, (2) precipitates of titanium, (3) oxides and (4) boron nitride. The aim is to improve the fishscale resistance due to the presence of fine and dispersive particles and inclusions. The selection of alloying elements depends on the basic chemical composition to a large extent. For the ULC steels, the decisive elements are carbon, nitrogen, sulphur, and the useful alloying elements are titanium, rare earth metals and boron, which can improve remarkably the final properties.

Carbon (C) and nitrogen (N) in sheet steel results in higher mechanical properties, age hardening, and deterioration of the r-value (measure of resistance to thinning and drawability). Liquid steel is processed through a vacuum degasser to reduce C and N to levels low enough that the remainder can be “stabilized” by small additions of titanium (Ti) and niobium (Nb).

Ti and Nb are strong carbide/nitride formers, taking the remaining C and N out of solution in liquid iron, after which these latter two elements are no longer available to reside in the interstices between solidified iron atoms. Non-ageing IF steel has no yield point elongation, which means fluting and stretcher strains are never a problem.

The IF steel made using only Ti is very common and is used to produce the best mechanical properties for deep drawing. It is very reactive in a zinc bath and is usually coated only as galvanize (GI). Also, a very popular type of IF steels is stabilized with both Ti and Nb. The synergy of these two elements allows complete stabilization to be achieved at lower levels of each element. Depending on the relative amounts of Ti and Nb, the steel needs to be annealed at a higher temperature during galvanizing and has slightly inferior mechanical properties to the Ti type. Ti-Nb type IF is also less reactive in a zinc bath and is usually employed when producing galvanneal (GA) steels. Ti-bearing ULC steels 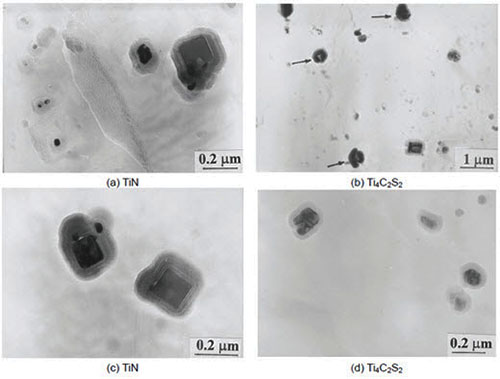