The twin roll casting method offers huge time and cost savings in comparison to traditional processes as it focusses on creating strip materials directly from liquid alloys.
Through the study of twin rolled magnesium microstructures it can be clearly seen that the finished product structure is uniform, significantly refined, and almost equiaxed throughout the cross section.

In the conventional process, Mg-based alloy strips are fabricated by hot-rolling slabs prepared by direct chill (DC) casting. As the slabs are coarse-grained materials, a sophisticated rolling process has to be carried out carefully to fabricate much thinner strips. These repeated steps result in low production efficiency and high production cost. To overcome the difficulties associated with a solid state deformation process, a twin roll casting (TRC) process has been developed to produce Mg alloy strips directly from liquid Mg alloys. In recent years, a TRC technique has been developed extensively and lots of research work has also been carried out to improve our understanding of the solidification mechanism of TRC process.

The conventional TRC process integrates casting and rolling into a single process and particularly stresses the large deformation in the hot-rolling process. The major problems with the conventional TRC process are coarse columnar grains of a size of approaching 1mm, severe chemical segregation at the center of the strip, large amounts of defects like bleeding and only casting dilute alloys with narrow freezing range. Most of such problems are created during the deformation process.

In the TRC process, molten magnesium metal is heated to liquid temperature, flows down the cooling slope. The melt is rapidly cooled as it reaches the tip of the launder (nozzle). The slope is maintained at a constant temperature as an adiabatic boundary condition in the tundish. The melt is further dragged onto the surface of the lower roll from the tundish. Solidification starts immediately after the melt leaves the tundish, hence, in the TRC process, the tip sustains the melt at a constant level thereby improving the integrity of the solidified strip, minimizing the turbulence and distributing the melt to the required strip width.

Due to contact with water cooled rolls, the melt solidifies into a continuous casting strip. The transformation from liquid to solid includes a semi-solid region. When the solidifying metal reaches adequate strength, determined by its ‘rigidity point‘, the material experiences a degree of hot working before leaving the roll bite. Therefore, the TRC process combines solidification and hot rolling deformation into a single process. A schematic diagram of the TRC process is shown in Figure 1.

In the work of I.Bayandorian et al is presented the results of the investigation of the AZ31 magnesium alloy. The AZ31 is produced by twin-roll alloy strips process using the melt-conditioned twin-roll casting (MCTRC) and by a conventional twin-roll casting (TRC) process were processed by homogenization treatment, hot rolling, and annealing during and after hot rolling to give a final thickness of 1.6 mm before tensile testing.

In contrast, the TRC microstructure is dominated by a coarse columnar dendrite structure with large, equiaxed grains in the center and a thin, fine-grain chill layer at the surface. The average grain size of the MCTRC strip was approximately 74μm, compared with 616μm for the TRC strip. Extensive microstructural examination revealed that the MCTRC strip was free from severe centerline segregation, whereas macro segregation was found at most of the centerline of the TRC strip (arrow S in Figure 2(c)). The MCTRC strip also displayed a smaller secondary dendrite arm spacing (SDAS) than the TRC strip. 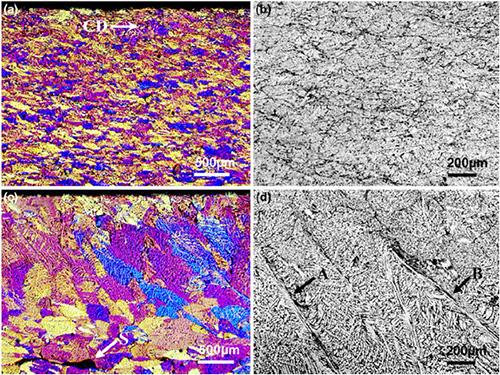 Figure 2: Optical micrographs of the as-cast microstructures produced by MCTRC (a) and (b), and by TRC (c) and (d); the polarized light micrographs (a) and (c) are presented to show grain structures and the black and white micrographs (b) and (d) to show features of plastic flow.