The QSL process is one of a handful of promising lead processing technologies which counter act the drawbacks of the sinter plant – blast furnace methods currently in operation.
A highly-efficient process, QSL produces lead from lead concentrates and secondary raw materials in one reactor and can cut the environmental impact in half when comparing conventional methods.

Lead is one of the few metals known and used by man prior to 5000 B.C. The only commercially important lead mineral is a dark gray sulfide of bright metallic luster and cubit habit: galena (PbS). Lead may have been the first metal produced by smelting, because the less than 900°C operating temperature required (copper requires over 1,100°C) is easily attained in a simple open wood fire. Lead is soft and heavy, can be bent and deformed without rupture, is corrosion resistant and has a mere 327°C melting point.

During recent decades, several innovative new lead production processes have been developed to overcome the drawbacks of the conventional sinter plant – blast furnace route. The most promising ones are the flash smelting and the bath smelting processes, among them the QSL (Queneau-Schuhmann-Lurgi) technology, the Kivcet technology, and the TBRC process have proven their suitability on an industrial scale.

The QSL process (named after the inventors Queneau, Schumann and Lurgi) allows the highly-efficient production of lead from lead concentrates and secondary raw materials in one reactor. Contrary to conventional equipment, both oxygene instead of air as well as the sulphide sulphur existing in the concentrates are used as the main energy source with this innovative technology. This allows for major elimination of fossil fuels and reduces the impact on the environment significantly since the CO2 emissions are only half the volume of conventional processes.

The QSL technology makes it possible to gain lead from lead ores and secondary raw materials in a single encapsulated aggregate which, in comparison to conventional technologies, has a noticeably lower specific energy consumption. The energy requirements dropped from 15.2 right down to 4.5 GJ per ton of lead produced, by exploiting the energy of the sulphides contained in the ores as the main source of energy. The wide range of materials which can be charged, underscores the efficiency of this process. The annual production of 155,000 t of lead its alloys as well as 120,000 t of sulphuric acid also set distinctive international standards.

The treatment process consists in homogenizing the sulphides-containing lead ores and secondary raw materials together with coal and water in continuous mixers. These are then smelted in a 33 m long horizontally lying QSL reactor divided into an oxidation zone, 3.5 m in diameter and a reduction zone with a diameter of 3 m.

Conveyor belts feed the premixed charge through feed ports to the reactor. Pure oxygen is blown in through tuyères at the bottom of the reactor at temperatures of 1,200°C. In the resulting oxidation zone thus created, lead bullion containing impurities of copper, silver, other precious metals, antimony and bismuth is produced. Due to the slightly inclined construction, the lead bullion at a temperature of more than 1,000°C flows to the front end of the oxidation zone. The off-gas is cooled down to 400°C, cleaned in a number of steps and the therein contained SO2 converted to sulphur dioxide of especially high purity.

Primary slag, containing a residual amount of lead in the form of lead oxide, is also created in the oxidation zone, and flows in a counter-current direction into the reduction zone. Coal dust charged here, reduces the lead oxide in the slag to metallic lead which then flows back to the oxidation zone.

The siliceous slag is tapped from the rear end of the reduction zone and quenched using powerful water jets to sand with a grain size of 1 mm. This glassy granulate has the trade name BERZELIT. Metallic crude lead is siphoned off continuously from the front end of the oxidation zone into cooling kettles where it is decopperised. Further treatment is carried out in the refining process.

Lead is refined in 24 kettles, in which the individual impurities of the lead bullion are removed selectively in up to 9 steps – clearly a more complicated procedure than in secondary smelters. The lead produced has an especially high grade of purity and also serves as starting material for making precisely defined lead alloys by adding specific amounts of copper, calcium, tin, silver or tellurium. 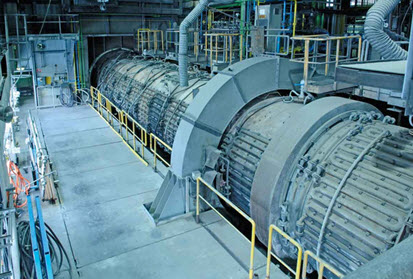