Micro parts are increasingly common where the requirement is to manufacture miniaturized and sometimes complex geometries in the submillimeter range. Some of the parts which can be fabricated using these processes include among others connector pins, miniature screws, microgears, microshafts.

The increasing demand for powerful miniaturized products for all industrial applications has prompted the industry to develop new and innovative manufacturing processes to fabricate miniature parts. One of the major challenges facing the industry is the dynamic market which requires continuous improvements in design and fabrication techniques. This means providing products with complex features while sustaining high functionality.

Micro parts are defined as parts that have at least two dimensions in the submillimeter range.

In microforming, the material deformation behavior is different from that in macroforming. It is generally difficult to predict and control the microscale material deformation behavior due to the small size of deformed parts. In this process, there are four interactive factors affecting the material deformation, namely tooling-workpiece interface condition, as shown in Figure 2. In addition, they further affect the performance of microforming system and the quality of the microformed parts in terms of deformation load, stability of the forming system (scatter of process variables), defect formation, dimensional accuracy, mechanical properties and surface finish of the formed microparts. Furthermore, the realization of microforming processes in laboratories is different from that in mass production [30]. Product quality and productivity are two major concerns in the latter. Good product quality and high productivity can be achieved with a properly designed process chain. 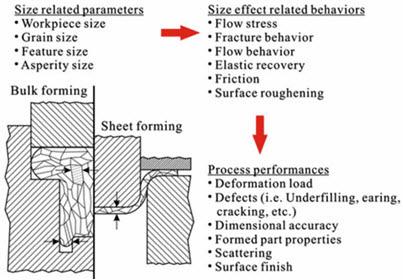