The melt conditioned twin roll casting process is a relatively new technology which aims to correct some of the disadvantages of the TRC process namely the reduced strength due to coarse grain structures. The proceeding MCAST process provides conditioning in the melt stage which ultimately generates materials with excellent grain size after the rolling process.

Several processes, such as powder metallurgy, rapid solidification and severe plastic deformation, have been used in the recent past to acquire fine grain structures in Mg-alloys. However, only a small quantity of material can be produced by these processes. Twin roll casting (TRC) has been demonstrated to be a process capable of producing Mg sheets at significantly reduced cost. However, the quality of the Mg sheets produced by the TRC process is limited by the formation of coarse columnar dendritic grains and centreline segregation, which reduces the strength and ductility of Mg-alloys. Several techniques have been employed by various research groups to obtain a fine grain structure in TRC strips.

MC-TRC (Melt Conditioned Twin Roll Casting) (see Figure 1) is a new process developed to overcome the disadvantages of the conventional TRC process, by conditioning liquid metal prior to the solidification processing.

Solidification control is achieved by a MCAST (Melt Conditioning by Advanced Shear Technology) unit which feeds a twin roll caster. The MCAST unit consists of a twin screw device, in which pair of co-rotating, fully intermeshing and self-wiping screws rotate at high speed inside a heated container with precise temperature control.

The specially designed screws are able to provide high shear rate, high intensity of turbulence.  The MCAST process provides conditioned melt with a uniform temperature, uniform chemical composition and well dispersed nucleating particles. The conditioned melt is then supplied to a TRC machine operating at low applied load for the production of high quality thin strip. In this paper we present our experimental results on magnesium alloy strips produced by the MC-TRC process. 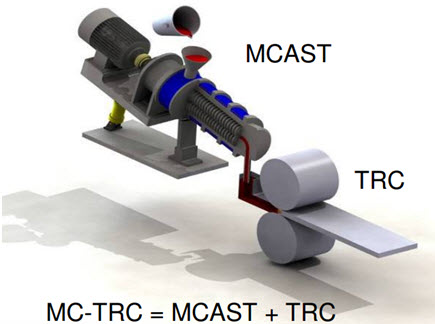 In the paper of S. Das, N. S. Barekar, O. El Fakir, L. Wang et al. the investigation covers magnesium AZ91D strips with high quality fabrication by TRC and MC-TRC processes. Throughout the entire MC-TRC strip, extremely uniform composition and grains were achieved. The mean grain size of the MC-TRC strip is about 60 μm, which is one order of magnitude smaller compared with that of the standard TRC strip. This originates from uniform composition and temperature field throughout the whole volume of liquid melt as well as the well-dispersed heterogeneous nucleation sites provided by the intensive shearing in the MCAST machine. Investigation also shows that both TRC and MC-TRC strips show little central line segregation, suggesting that both TRC and MC-TRC processes with reduced deformation are effective to prevent the formation of segregations.

Figure 2 shows the polarized-light optical micrographs taken from a longitudinal cross-section of the 1.7 mm thick AZ31 strips produced by both TRC and MC-TRC processes as a result of investigation published in a paper of S. Das, N. S. Barekar, O. El Fakir et al. The TRC strip (Figure 2a) has a coarse dendritic columnar grain structure with an average equivalent grain diameter of 229.67±90.59 μm. Detailed examination has confirmed the existence of severe central line segregation, which is rich in solute elements and usually of a eutectic composition. In contrast, the MC-TRC strip (Figure 2b) had a fine and equiaxed microstructure throughout the entire thickness, and was free from centreline segregation. The average equivalent grain diameter of the MC-TRC strip is 76.63±18.14 μm.

Figure 2: Through-thickness microstructure on a longitudinal section of AZ31 strips with 1.7 mm thickness produced by (a) TRC and (b) MC-TRC

Microstructures of homogenized samples reveals that MC-TRC strips have undergone higher degree of deformation compared to TRC strips. It has been attributed to the different solidification mechanism for TRC and MC-TRC strips. In the case of the TRC sample, columnar grains grow from the surface of the roll to the interior, which is also responsible for solute segregation at the centre of the strip, whereas, in the case of the MC-TRC sample the equiaxed solidification front grows from the roll surface towards the centre of solidifying strip.

After homogenization TRC and MC-TRC showed comparable mechanical properties at higher temperature (300-400°C). However, at 250°C the MC-TRC sample showed better strength and ductility. This was attributed to the fine grain structure of the MC-TRC samples. Analysis of fracture surface and sub-surface revealed that at elevated temperature grain size becomes less relevant in deformation process.

Strain induced recrystallization and growth was observed during tensile tests. It was also conclusively found that the dynamic recrystallization and growth helps in the deformation process. Pores present on and near the surface is more detrimental compared to pores present inside the strips. The homogenized MC-TRC strips can be successfully hot-stamped into engineering components without prior hot rolling. Whereas the TRC samples despite of good tensile properties, fails during hot stamping process.