There are numerous configurations of rolling mills including single stand mills and tandem stand mills.
One specific problem common to both configurations is related to the coating of the rolls which in turn can lead to surface quality issues on the finished strip. Countermeasures for this include the installation of brush rolls to maintain the cleanliness of the rollers.

The hot rolling operation is performed at the highest possible temperature to lower flow stress in order to reduce loads and to achieve high reductions. An upper temperature limit is imposed by the need for controlling recrystallization and precipitation, dependent on the alloy, as well as by the occurrence of pick-up. During conventional rolling, the coarse as cast structure changes to a deformed and recrystallized structure having a considerably finer grain size. Coarse primary precipitates are crushed and become distributed more evenly. Decreasing temperatures during rolling and an increase in vacancy concentration in the lattice due to deformation lead to a further precipitation of secondary phases.

With regards to microstructure, hot rolling can be seen as a succession of deformation and annealing steps. The most dominant metallurgical features are recrystallization and the development of preferred crystal orientations (texture). Both processes are interrelated and influenced by ongoing precipitation. Recrystallization is particularly determined by the alloy system and the processing conditions. In high purity aluminum, the grain boundary mobility is high and the material already shows rapid recrystallization during processing (dynamic recrystallization).

The presence of Mn and Cr causes the same effect unless the elements are already bound in coarse particles. Within the Al-Mg-Mn alloy system, used in considerable amounts for beverage cans or automotive components, recrystallization covers a broad range within the scope of industrial conditions and thus can be influenced to a large degree by the choice of rolling parameters. In industrial practice, the recrystallized structure can be obtained in a separate annealing treatment, but more sophisticated technologies utilize self-annealing on the coil from the rolling heat.

In a traditional hot mill, aluminum ingots are soaked in furnaces before they are brought to the Reversing or Break-Down Mill to be reduced to a long and slender strip. Once the strip is dramatically reduced, then it is passed on to the Finishing Mill, a series of rolls further down the same line, where it is further reduced to the final thickness before being coiled at the end of the process. A continuous rolling line casts a continuous thin slab, which progresses through a roughing mill, and then a finishing mill before being coiled, all in one, continuous process. A plate mill has one break down mill and a separate finishing mill. The plate is passes repeatedly under the same mill until the final thickness is obtained.

Hot rolling mills for aluminum have roll coating problems, as aluminum powder sticking to the surface of the work rolls affects the surface quality of the rolled strips. Brush rolls and other special mechanisms are installed into aluminum rolling mills as countermeasures for such problems. 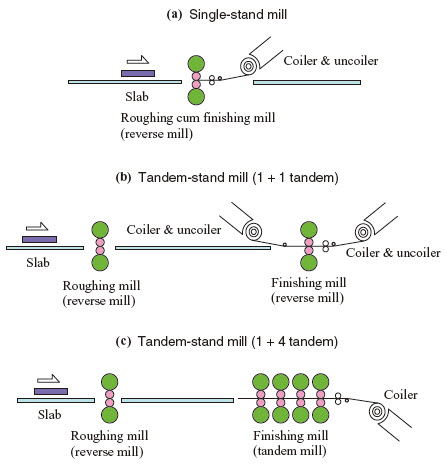