Strain ageing of steel was first observed during the 19th century when the maximum load carrying capacity of a test piece was increased after it had been retested after a previous series of testing in the plastic range.
General acceptance has been recognized that strain ageing is due to the diffusion of carbon and/or nitrogen atoms in solution to dislocations that have been generated by plastic deformation however the resulting characteristics are the result of a complex series of metallurgical reactions.

The behavior of steel is significantly affected by its chemical composition and the method of manufacture. Bauschinger (1887) observed an increase in the maximum load-carrying capacity of a piece of steel after it was tested in the inelastic range, left for some time and then retested. This observation is now known as strain-ageing. Physical basis of this phenomenon can be interpreted by time dependent diffusion of small elements such as carbon and nitrogen to crystal flaws (e.g. dislocations). Plastic deformation (yielding) is triggered by the movement of dislocations through the crystal, whereas the presence of small atoms (e.g. carbon and nitrogen) can markedly increase the sliding resistance between the atoms and hence increase the yield strength.

Over the last 50 years a vast range of research has shown that all structural steels are potentially susceptible to strain-ageing. Strain-ageing is known to cause an increase in yield strength and ultimate tensile strength of reinforcing steel bars, while tensile elongation capacity will be less in strain-aged steel bars.

When steel has been strained (deformed plastically) and then allowed to age, it has been subjected to what is known as strain ageing. Figure 1 shows the stress-strain curve for mild steel (low-carbon steel) compared with that for the same steel pre-strained up to point B and then subjected to ageing. As a result of the strain ageing, the yield strength and the tensile strength were increased by ΔY and ΔU respectively, and the elongation was decreased by amount Δe. In general, strain ageing increases strength to some extent but results in a loss of some ductility. It is known that strain ageing is accompanied by a decrease in fracture toughness, which is usually reflected by an increase in the brittle transition temperature (BTT). 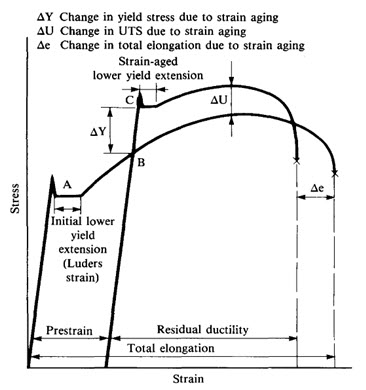 Figure 1: A schematic representation of the influence of strain ageing on the stress-strain curve for mild steel (UTS =ultimate tensile strength)

These precipitates impede the motion of subsequent dislocations, and result in some hardening and loss in ductility. The extent of strain ageing, which is a thermally activated process, depends primarily on ageing time and temperature. In general, extended ageing results in a saturation value above which further ageing has no effect.

In fact, ageing at very high temperatures can result in over-ageing, which is accompanied by a loss in hardness and a gain in ductility. Repeated straining and ageing usually produce a greater increase in strain ageing. For strain ageing to manifest itself, free carbon and nitrogen atoms in solid solution have to be available, but very little carbon and nitrogen are required. As little as 0.01 per cent, for example, is sufficient to produce.

The alloying elements in the steel are dispersed into their characteristic microstructural constituents, predominantly iron and iron carbide. In the case of nitrogen and some of the carbon that is not absorbed in iron carbide, they are in the iron-rich phase as small individual atoms in interstices in the crystal structure. After the steel cools from rolling, over time, the carbon and nitrogen atoms migrate through the structure to the dislocations due to the distortion they create in the crystal lattice.

The motion of these (small) interstitial atoms to the dislocations produces a stabilizing effect which increases the force necessary to cause the dislocation to allow slip. It now takes a greater force to deform the steel, raising its strength. If both carbon and nitrogen are present, iron-carbon-nitrogen compounds (carbonitrides) can form that also restrict the motion of the dislocations and raises the strength of the steel.

The effect of temperature is important on the “ageing” phenomenon in structural steels. Structural steels are more complex that sheet steels in that they contain relatively more carbon and alloy and have a more complex microstructure. As a result, the ageing of the steel is measured by increases in strength and loss in toughness which does not occur at room temperature. In general, temperatures in the 300°F-700°F range for periods of 1-5 h are necessary to develop ageing effects.

A second strengthening mechanism occurs when cold deformation (alone) is applied to steels. When dislocations break away for their pinning interstitial atoms and begin the movement causing slip they begin to intersect with each other. A complex series of interactions between the dislocations occurs, causing them to pin each other, decreasing their mobility. The decreased mobility also results in higher strength, lower ductility and lower toughness. As a result, cold deformed steels already have lowered ductility and toughness before any strain ageing occurs and when heating follows cold deformation, the loss in ductility and toughness is greater. It is this combination of events that is the most damaging to the toughness of structural steels.

It is these two effects, the increased strength and reduction in ductility and toughness from cold strain followed by an additional strength increase and toughness loss through ageing, that are the primary elements in the process of strain ageing.