Spark plasma sintering is a relatively new technique which mainly represents a big advantage in the extremely small amount of time required to complete the process.
SPS normally consists of 4 main stages, gas removal and vacuum, application of pressure, resistance heating and finally the cooling stage.

Spark Plasma Sintering is a new technique which takes only a few minutes to complete compared to conventional sintering which may take hours or even days for the same results. This high sintering rate is possible in SPS since high heating rates can be easily attained due to internal heating of the sample as opposed to external heating seen in the case of conventional sintering techniques.

Also, sintering time is reduced in SPS due to small holding time at the sintering temperature, usually 5 to 10 minutes while in conventional sintering it may extend to hours. The heating rates normally attained in conventional furnaces are 5 to 8°C/min which can go as a maximum up to 10°C/min. So, to attain a temperature of 1200°C will usually require 2 to 4 hours or more whereas in SPS heating rates exceeding 300°C/min are easily obtained hence a temperature of 1200°C can be obtained in only 4 minutes.

A spark sintering method was investigated and patented in the 1960s and used to compact metal powders, but due to high equipment cost and low sintering efficiency it was not put to wider use. The concept was further developed during the mid 1980s to the early 1990s, and a new generation of sintering apparatus appeared named Plasma Activated Sintering (abbreviated PAS) and Spark Plasma Sintering (abbreviated SPS).

Common to these systems is the use of pulsed direct current to heat the specimens. These sintering techniques currently attract growing attention among productions engineers as well as materials researchers. Whether plasma is generated has not been confirmed yet, especially when non-conduction ceramic powders are compacted. It has, however, been experimentally verified that densification is enhanced by the use of a pulsed DC current or field. This family of techniques in academia is also named as pulsed electric current sintering (PECS) or electric pulse assisted consolidation (EPAC). SPS allows compaction of ceramic and metal powders at low temperature and in short time (within minutes). 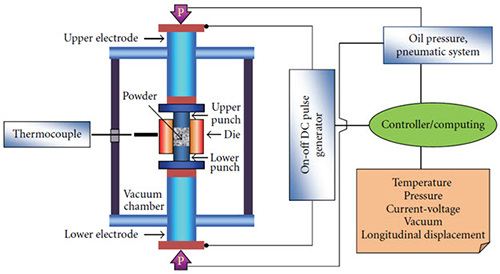 Control of sintering temperature is possible through setting the holding time, ramp rate, pulse duration, and pulse current and voltage. The DC pulse discharge could generate spark plasma, spark impact pressure, Joule heating, and an electrical field diffusion effect. In SPS, sintering is assisted by the on-off DC pulse voltage compared to conventional hot pressing as shown in Figure 2. The application of pressure helps plastic flow of the material. Figure 3 illustrates the flow of DC pulse current through the particles.

Usually, SPS is carried out in four main stages. The first stage is performed to remove gases and create vacuum. Then pressure is applied in the second stage followed by resistance heating in the third stage and finally cooling in the fourth stage. When a spark discharge appears in a gap or at the contact point between the particles of a material, a local high-temperature state of several to ten thousands of degrees centigrade is generated momentarily.

This causes evaporation and melting on the surface of powder particles in the SPS process, and necks are formed around the area of contact between particles. The application of pressure and current, in addition to the high-localized temperatures generated through resistance pulse heating, improves heating rates and reduces sintering time and temperature leading to the consolidation of nanopowders without excessive grain growth. On the other hand, SPS is not only a binderless process, but also does not require a precompaction step. The powder is directly filled into a graphite die through which current is passed and pressure is applied leading to a fully dense material with superior mechanical properties. 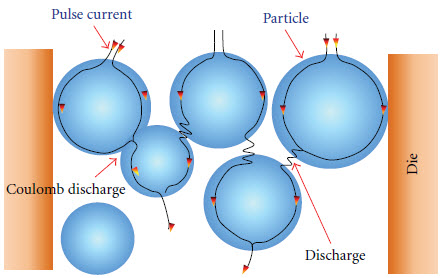