Sensitization refers to the susceptibility of materials to intergranular corrosion and comes about by a combination of factors in the materials composition and treatment.
Contributing factors can include heating and cooling through specific temperature ranges, increased C content or decreased Cr content and among other factors.

An alloy is said to be “sensitized” if it is more susceptible to intergranular corrosion than a non-sensitized sample of the same alloy. Atkinson and Van Droffelar 1982 have made some observation on sensitization which are:

1) Sensitization occurs when the alloys are slowly heated or cooled through the range of approximately 500°C to 800°C.

A steel which has been sensitized may appear essentially unaffected, yet it will be found to possess reduced strength and corrosion resistance which, if severe enough, will cause the steel to lose its characteristic metallic ring if struck with a metal object; while bending or twisting will produce cracks. The most popular explanation for the sensitization phenomenon is the chromium depletion theory. According to Miller and Boulton (1982) intergranular corrosion occurs along the grain boundaries of a metal.

In the paper M. Dománková et al., some preliminary comparisons are reported on the combined effects of deformation, temperature and aging time on sensitization in AISI 316 austenitic stainless steel.

The chemical composition of experimental steel is given in Table 1. The material examined was supplied in the condition after solution annealing (1050°C for 60 min), followed by water quenching.

Table 1: Chemical composition in wt.% of austenitic stainless steel used in this study

The oxalic acid etch test was used for the determination of steel sensitivity to intergranular corrosion. The specimens were electrolytically etched in 10% oxalic acid for 90 sec. at a current density of 1 A/cm2. The etched microstructures were then examined at 250x.

The rapid oxalic acid etch test was used for the analysis of the grain boundary sensitization development. Examples of microstructure obtained by etch test for AISI 316 are given in Figure 1. The TTS diagram was obtained by plotting sensitization test results on a temperature versus log soaking time axes and drawing a line which demarcates the sensitized and non-sensitized regions (Figure 2). The nose of this curve for the experimental steel AISI 316 was at the temperature 800°C and tmin=20 min. 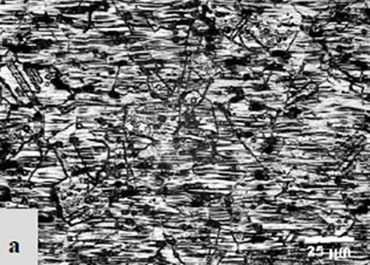 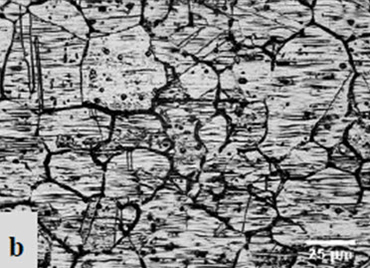 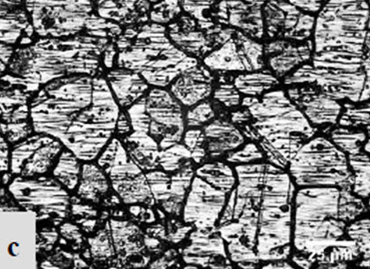 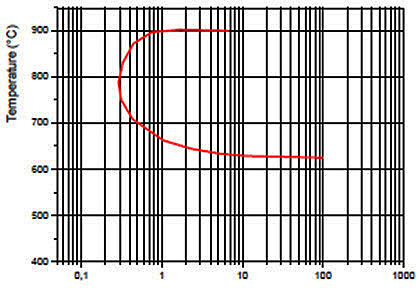 Figure 2: TTS diagram for AISI type 316 austenitic stainless steel established according to the test ASTM A262 practice A