The semi-solid processing of alloys is a relatively new commercial process which moved from a laboratory curiosity to a fully-fledged and viable manufacturing route in the 1970’s.
Lying between established solid and liquid state techniques, SSP allows the associated costs of solid state processing to be controlled and provides all the advantages of superior mechanical properties due to the precise changes in microstructure resulting from the slurry production steps.

Today’s engineer can select from numerous techniques of manufacturing net-shape components using metals and their alloys. The majority of these techniques, in principle, could be classified into two conventional routes restricted to either the solid or liquid state. The liquid-state methods involve casting with a variety of modifications: gravity, high-pressure die casting, squeeze casting, etc..

In contrast, the solid-state techniques generally require multi-step operations after casting, such as homogenization of chemistry, hot working, cold working, forming, machining, or heat treatment. As a result, the properties of wrought components are predominantly superior to castings. The number of manufacturing steps and their complexity, however, contribute to a significantly higher cost of the final product. The economy factor represents the downside of many non-conventional manufacturing techniques (e.g., powder metallurgy). Thus, there is a continuous quest for a technology that would reduce costs and at the same time improve properties.

Semi-solid processing of alloys originated at the MIT Materials Engineering laboratories in the early 70’s. Since then it has progressed from a laboratory curiosity, to a fully commercial process for the production of near net shape components in a variety of materials and for a diverse industrial clientele.

The main thrust of commercial development has taken place in the use of aluminum alloys, and to a lesser extent copper and magnesium alloys. However the ability of the process to shape almost any alloy to a near net shape product in a single operation, provides it with tremendous advantages over its competitors. The advantages are accentuated when shaping high melting point alloys such as tool steels, stellites and superalloys which are either difficult or nearly impossible to shape using conventional methods.

Semi-solid metal (SSM) casting is a relatively new manufacturing route which offers an attractive near-net shape manufacturing route for precipitation hardenable aluminium alloy components, potentially giving them mechanical properties that are comparable to a wrought or machined equivalent product, but with the benefit of the rapid processing route of casting.

The mechanisms involved during agitation in the slurry production step lead to the formation of globular solid particles within the melt. These particles continue to form and the slurry is transferred to the high pressure die casting facility when it reaches a solid fraction of approximately 50%. The mechanisms causing the globularization of the slurry have an effect on the nature of the final α-primary globular particles and, hence, affect the evolution of the as-cast structure during any post solidification heat treatments. 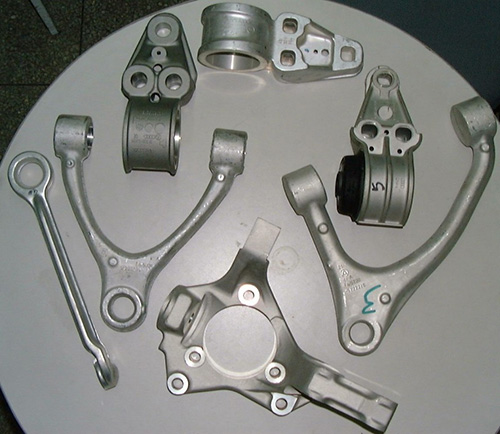