Precipitation hardening, or age hardening, provides one of the most widely used mechanisms for the strengthening of metal alloys. The fundamental understanding and basis for this technique was established in early work at the U. S. Bureau of Standards on Duralumin.

The importance of theoretical suggestion for the development of new alloys is clear from the historical record. At the end of the 19th century, cast iron was the only important commercial alloy not already known to western technology at the time of the Romans. When age hardening of aluminum was discovered accidentally by Wilm, during the years 1903 -1911, it quickly became an important commercial alloy under the trade name Duralumin.

The strength and hardness of some metal alloys may be enhanced by the formation of extremely small uniformly dispersed second-phase particles within the original phase matrix in a process known as precipitation or age hardening. The precipitate particles act as obstacles to dislocation movement and thereby strengthen the heat-treated alloys. Many aluminum based alloys, copper-tin, certain steels, nickel based super-alloys and titanium alloys can be strengthened by age hardening processes. 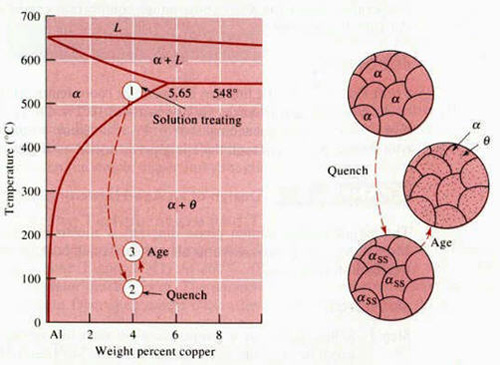 Figure 1: The aluminum rich end of the Al-Cu phase diagram showing the three steps in the age-hardening heat treatment and the microstructures that are produced.

In an attempt to understand the dramatic strengthening of this alloy, Paul D. Merica and his coworkers studied both the effect of various heat treatments on the hardness of the alloy and the influence of chemical composition on the hardness. Among the most significant of their findings was the observation that the solubility of CuAl2 in aluminum increased with increasing temperature.

Although the specific phases responsible for the hardening turned out to be too small to be observed directly, optical examination of the microstructures provided an identification of several of the other phases that were present. The authors proceeded to develop an insightful explanation for the hardening behavior of Duralumin which rapidly became the model on which innumerable modern high-strength alloys have been developed.

They summarized the four principal features of the original Duralumin theory:

1) Solution Treatment, or Solutionizing, is the first step in the precipitation-hardening process where the alloy is heated above the solvus temperature and soaked there until a homogeneous solid solution (α) is produced. The θ precipitates are dissolved in this step and any segregation present in the original alloy is reduced.

2) Quenching is the second step where the solid α is rapidly cooled forming a supersaturated solid solution of αSS which contains excess copper and is not an equilibrium structure. The atoms do not have time to diffuse to potential nucleation sites and thus θ precipitates do not form.

3) Aging is the third step where the supersaturated α, αSS, is heated below the solvus temperature to produce a finely dispersed precipitate. Atoms diffuse only short distances at this aging temperature. Because the supersaturated α is not stable, the extra copper atoms diffuse to numerous nucleation sites and precipitates grow. The formation of a finely dispersed precipitate in the alloy is the objective of the precipitation-hardening process. The fine precipitates in the alloy impede dislocation movement by forcing the dislocations to either cut through the precipitated particles or go around them. By restricting dislocation movement during deformation, the alloy is strengthened.

A general model for decomposition is given, followed by details of the precipitation sequences in 4 specific alloy systems: Al-Cu, Al-Cu-Mg, Al-Mg-Si and Al-Zn-Mg. The Al-Cu system is used as the main example of decomposition, i.e.

Coherency strain hardening results from the interaction between dislocations and the strain fields surrounding GP zones and/or coherent precipitates. Chemical hardening results from the increase in applied stress required for a dislocation to cut through a coherent (or semi-coherent) precipitate. This in turn depends on a number of factors, including:

the extra interfacial area – and hence energy – between precipitate and matrix;
the possible creation of an anti-phase boundary (APB) within an ordered precipitate and
the change in separation distance between dissociated dislocations due to different stacking fault energies of matrix and precipitate.

Dispersion hardening occurs in alloys containing incoherent precipitates or particles – i.e. typically those that have been overaged. This hardening results from the increased shear stress required for dislocations to by-pass these obstacles.

As mentioned above, the precipitation reactions in Al-Cu are quite complex. The equilibrium phase CuAl2 is difficult to nucleate so its formation is preceded by a series of metastable precipitates. Guinier and Preston first discovered many of the age hardening phenomena. The first two precipitates to form in the sequence are, therefore, known as GP zones. GP1 consists of 10 nm diameter copper-rich plates on {100}Al planes. These develop into GP2 zones which are also coherent plates 10 nm thick and 150 nm diameter. These lead to maximum hardening. Theta’ /θ’/ precipitates then replace the GP zones as semi-coherent particles, a stage known as over-aging because the hardness begins to decrease. The equilibrium phase CuAl2 has a tetragonal crystal structure and contributes little to hardness.

In the field of 6000 series precipitation hardening aluminum alloys, for instance, process models have been able to describe the effect of quench-induced precipitation on structural defects on the hardening potential during isothermal low-temperature aging.

The fracture toughness of 7000 series alloys has been related to some elements of the microstructure resulting from the thermo-mechanical treatment in phenomenological models. The general strategy of process modeling is to use individual equations which have been developed for well defined experiments and try to integrate them in an integrated manner for the more complex practical situations where coupled effects operate.

However, a good description is still lacking when several of these phenomena are simultaneously operative. The understanding of competitive precipitation of several phases (metastable and stable) on several nucleation sites (e.g. homogeneous and on structural defects) is very limited, as well as the understanding of the shearing/by-passing transition leading to the maximum strength for precipitation hardening materials. The strain hardening behavior of materials containing precipitates (and thus necessarily a solid solution) is poorly understood, and predicting the fracture toughness in cases where several fracture modes are simultaneously operating is not possible in the present state of the art.