Non-metallic inclusions are an ever present issue which adversely affects mechanical properties and therefore overall material performance.
As we know, the presence of Sulphur can significantly improve the machinability of steel but deformable MnS inclusions resulting from rolling and forging, can lead to anisotropy in mechanical and fatigue properties.

A typical microstructure of ferritic grains, pearlite bands and shape of flattened MnS is illustrated in Figure 1. Figure 2 illustrates impact energy values for two steels with different sulphur contents. An interesting observation is that the degree of anisotropy is less for the higher sulphur steel. This is because the sulphides in the low–sulphur alloy were relatively more elongated. These observations also emphasize the role of inclusions in nucleating and linking voids, since the data illustrated represents the ductile mode of failure, so that the observed anisotropy is a direct consequence of the shape of the inclusions. It is important to note also that the sulphides may not be uniformly distributed within the steel in which case correlations of properties with the average concentration become less certain. 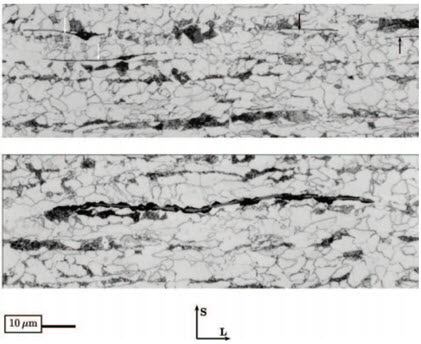 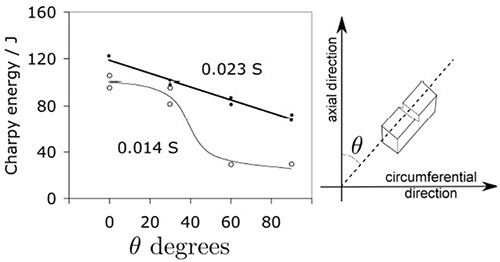 Figure 2: Charpy energy as a function of orientation and sulphur content (wt%). The tests were arranged so that all of the samples undergo ductile failure. Data for A106 grade B steel pipe.

Also, some investigations have shown that there are a number of inclusions present in the rail steels. In the paper of A.Chard, the investigation is performed on the steel grades UK 220 and UK 260. The steel composition is shown in Table 1.

Table 1: Charpy energy as a function of orientation and sulphur content (wt%). The tests were arranged so that all of the samples undergo ductile failure. Data for A106 grade B steel pipe.

The inclusions present in the steel on solidification are initially spherical and varying in diameter. The study concluded that those steels with high sulphur contents contained higher number densities of MnS inclusions. The 260 grade steels, composition given in Table 1, tend to have fewer but larger inclusions than the 220 grade rail steels and these inclusions are orientated in the longitudinal direction. The steel is then rolled to give the characteristic rail profile, which elongates the inclusions in the rolling direction, so the inclusions go from spherical to oval / cigar shape. In general it is found that most inclusions in rail steel are longitudinally orientated and differ in size. The rails are then put into service. In service the surface of the rail deforms most and so do the inclusions.

The inclusions do not deform in a uniform way, the longitudinal loads exceed the transverse loads which results in the formation of a flattened, pancake inclusion close to the surface which can become crack initiation sites. This large inclusion deformation is most associated with MnS inclusions as they are highly ductile when compared to SiO2 and Al2O3.

From this section it can be seen that the MnS inclusions present in rail steel deform more than the surrounding matrix when under an applied load causing the inclusions to flatten and elongate.