Aluminum bronzes have widespread applications where a specific level of durability and resistance is required. Two of the most common are the Manganese Nickel Aluminum Bronze (MAB) and Nickel Aluminum Bronze (NAB).
Depending on the job, there are a range of comparisons which can be made to ensure the correct material is selected including differences in mechanical properties, weight saving potential, and corrosion resistance.

Simply put, aluminum bronzes are used where other materials might fail prematurely or would be more expensive to buy or fabricate. For example, the alloys find widespread applications in chemical, petrochemical and desalination plants; in marine, offshore and shipboard hardware and equipment; in power generation, aircraft, automotive and railway engineering; and in the iron and steel-making, electrical manufacturing and building industries.

On the other hand, aluminum bronzes are extensively used as metal-sprayed or weld-deposited surfacing materials, generally over steel substrates, in order to provide wear, corrosion and sparking resistance.

Manganese–nickel–aluminium–bronze (MAB) is an alloy commonly used for marine propellers, and with equal popularity is its competitor nickel–aluminium–bronze (NAB). Both MAB and NAB materials are composed of the same component elements, but with MAB having a higher Mn content (10.8 wt.%) and NAB, a low Mn content (1.3 wt.%). The two bronzes are similar in many aspects, but there are important differences. In brief, MAB possesses better welding, hot-working, casting, and foundry properties, but its resistance to certain types of corrosion and cavitation erosion is inferior compared with NAB.

Among the two, NAB was first devised in England back in 1945. Apart from the above mentioned good properties, it bears a lower density ~ 7.65 g/cm3 (high manganese bronze ~8.25 g/cm3. This means that the thickness and weight of propellers could be kept low, but still retains the necessarily large physical dimension for thrust production.

Later in the 1950’s, a modified aluminum bronze, MAB was patented in the UK. The manganese here has four-fold purposes. It expels oxygen during casting so as to prevent oxidation of the alloy in the early fabrication period; it reduces the copper content so that the density is reduced further; it stabilizes the β phase from transforming into α+γ2 phase in which the γ2 phase is a brittle network within the α phase. The result is characteristic advantages in the strengthening phases making MAB more ductile and exhibits a better resistance to the total blade fracture upon moderate impact. According to a comprehensive review by Couture, MAB and NAB are similar in many aspects, but important differences exist. These differences may be summarized as follows:

•The mechanical properties of MAB are better than those of NAB when cast in thin sections
•The density of MAB is lower than that of NAB (7.45 g/cm3 versus 7.65 g/cm3), thus leading to weight saving
•Owing to the lower melting point, MAB has better welding, casting and foundry properties and
•Unlike NAB, MAB does not have an embrittling temperature range between 250°C and 450°C, thus resulting in ease of hot working and repair. On the other hand, MAB is less resistant to corrosion fatigue, stress corrosion cracking and cavitation erosion than NAB.

This may require additional heat treatment after welding repair in any area exposed to seawater or subjected to fatigue stressing. This makes MAB a little inferior and less favorable than NAB during material selection. 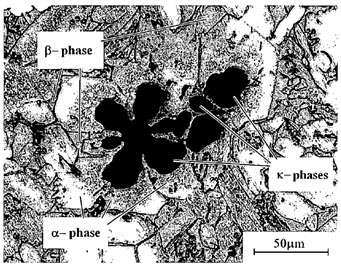 The optical micrograph shows in Figure 1, that as-received MAB consists of dark к-phases (intermetallic phases) embedded in a matrix composed of the α-phases (light etching) and the β-phase (dark etching).

On the other hand, the microstructure of the NAB cast sample was composed of coarse Widmanstätten α phase, coarse martensite β’ phase, fine к phase particles, and casting porosities (Figure 2).