Hot torsion testing is key in find the interdependence between hot plastic deformation process parameters, and the material structure and properties.
This method has been useful to provide the existence of hot ductility as being dependent on both temperatures and strain rates.

Over 500 million tons of steel production in the world is formed into rolled, forged and other products by means of various technological processes of metal forming where huge amounts of energy need to be employed to master the resistant forces and material stress. The behavior of metals and alloys during hot deformation is a complex issue and alters with the change of process parameters such as: deformation size, deformation rate and temperature. The analysis of hot working conducted with the application of a torsion test using a torsion plastometer allowed the determination of the influence of deformation conditions on plasticity of the steel. The high-temperature plastic working is coupled with dynamic processes of recovery influencing the structure and properties of alloys. One of the crucial issues is finding the interdependence between the hot plastic deformation process parameters, the structure and properties.

The torsion test is one of the most widely used methods for the evaluation of the deformation behavior of metals. Traditionally it is used to provide basic data for the characterization of the mechanical properties of metallic materials under shear. The torsion test provides hot ductility as dependent on temperatures and strain rates.

The hot torsion test is widely used for assessing hotworkability and constitutive behavior of new materials and alloys. One of the disadvantages of the hot torsion test is its non-homogeneity of deformation. It mostly occurs outside the gauge section of the specimen due to a longitudinal gradient in torsional stiffness along the specimen. Therefore, further improvements in the classical solutions and analysis of the test such as method of Fields and Backofen are demanded.

Methods have been proposed to use an effective length of the hot torsion test specimen. Existing methods, however, are only applicable to the materials with monotonic flow curve and therefore are not considered as general tools. Grabianowski and Kurowski presented an experimental method for estimating deformation outside the gauge section. The method is based on the results of a certain stage of deformation and therefore cannot be used to estimate development of the deforming region with deformation.

In an attempt to estimate the degree of longitudinal nonhomogeneous deformation within the hot torsion test specimen and its variations with deformation, a general iterative technique for estimating the effective length of the specimen is presented.

Figure 1:Drawing of the sample for hot torsion test 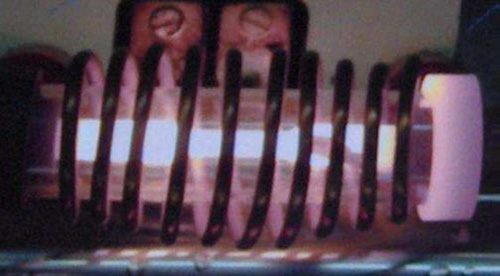 Figure 3:Sample during the trial