Hollow ingot casting is a well-established casting technology which is used by many well-known manufacturers the world over to produce lighter good quality ingots for a range of applications. Some key advantages of hollow ingot castings include shortened forging times and subsequent yield increase and obvious savings in materials and finished product weight.

Steel casting into ingots allows for the production of oversized components weighing up to several hundred tons. The main precondition of the competitiveness of any steel plant is the production of consistently high quality finished product. Among all forged parts, the rings or the shells for pressure vessels are traditionally made by removing the center part of the conventional ingots.

A hollow ingot is a forged ingot of typically with a large cross section, with a through axial channel formed during casting. This form of ingot is achieved by setting the specially designed metal rod with a gas cooling system internally within the casting form before casting. This technology allows a directional solidification of metal ingots to be cast from outside, inside and from the axial channel. The pouring of the metal into a casting form is performed via a simple siphon method.

Hollow ingots are used to produce forgings with an axial channel such as rings and have a number of advantages over ingots with traditional geometry: metal ingots produced by this technology, are chemically more consistent due to accelerated directional solidification. In addition, the axial channel can significantly reduce metal consumption.

The use of hollow ingots as a semi-finished product for cylindrical forgings brings the following additional benefits. In summary: hollow ingots takes less time to raise to forging temperature, by virtue of their smaller effective cross section; they require fewer forging operations, because the upsetting and punching steps become redundant. This is shown schematically in Figure 1. It is stated that it is possible to achieve the following savings by the use of hollow ingot instead classic, conventional forging ingot for forging large shells: 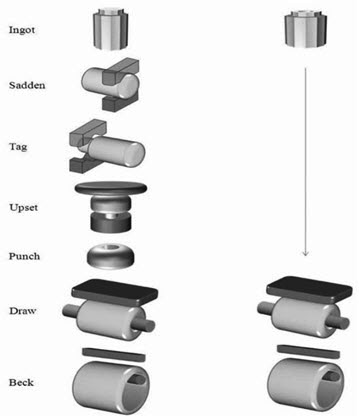 Figure 1: The conventional cylindrical forging route compared to that of the hollow ingot

Casting of hollow ingots has been an established process for a long time and with various producers of heavy forgings. Some notable European manufactures include Sheffield Forgemasters International Ltd. and AREVA Creusot Forge. The great advantage of using hollow ingots as a semi-finished product for the production of forgings such as shells and rings is mainly the lower level of the segregations. Other advantages are a shortened forging time and production yield increase, no welded area compared to rolling-welded process, higher quality of the product etc.

4. O.Jaouen: Numerical simulation of a shell forming, from hollow ingot to the final product with a powerful software tool, TRANSVALOR, ICRF 2014, Accessed August 2016