High silicon materials are classified as having a silicon content above r14.5% and as a result provide excellent corrosion resistance with good properties and cost savings on the nobles metals such as nickel and chromium.
Some examples of the technological characteristics include good castability, due to low melting points and small solidification temperature intervals.

However, because of its intrinsic properties, the high silicon iron-based alloys have some weaknesses such as low strength and impact toughness, high hardness and brittleness, poor weld ability, low thermal conductivity and high thermal expansion (coefficient), resulting in high tendency for shrinkage/porosity and other casting defects in production, unable to handle thermal shock and high pressure, and poor machine ability. Thus, to some extent, the application and promotion of the high silicon cast iron alloys has been limited only to castings.

At present the main products of the material in domestic market are pump parts and some small anode castings, while the study about using the material for large castings is very limited due to the poor properties. With the operating requirements on large repair parts of batch descaling in our steelworks (these sorts of products are entirely depended on import, the over size is 2 500 mm_470 mm_370 mm), the research on the stain resistance of high silicon iron-based alloys in nitric acid was referred, properties in the electricity added condition. The rare earth high silicon iron-based alloy studied in this article can be used to make the auxiliary anode which worked in the added electricity anode protecting condition, showing a promising application future.

ASTM Standard Specification according to : ASTM A 518/ 518 M Grade: 1, 2 & 3 and on the other hand corrosion resistant high silicon cast iron is standardized to BS 1591; 1949/1995 which contains data about chemical analysis and heat treatment. Table 1 shows the chemical composition according to BS 1591.

With a higher content of Si, corrosion resistance is greater with a simultaneous loss of relatively good mechanical properties and machinability. Because of this, for an application it’s necessary to specifically decide on chemical analysis of this material. The Si Content has to be between 14 and 16%, the reason being is a presence of a continual protection film of SiO2. This film is easy formed on the casting surface because of its great affinity Si to oxygen.

Ferrum with strong energy in combination with Si makes solid solution, lowering the meting point of Fe. The temperature interval between liquidus and solidus is extremely small, so it’s difficult to form Si segregation. Silicon is an element which makes a smaller y area of ferrum. Because of that, modification points are at higher temperatures, so 17% Si moves these for 50°C and explains the reason for the forming of rough gain during annealing, recrystallization and quenching.

There is influence of carbon on the Fe/Si system diagram but that doesn’t change the present phases configuration, but does make a smaller solidification interval of system and also Si content at the eutecticum. Carbon present in high silicon cast microstructures exists like lamellar graplut in the form of fine lamellas, rough lamellas and in the form of small bars. Sometimes in the microstructure carbide is present, especially in case of rapid cooling, immediately after solidification. 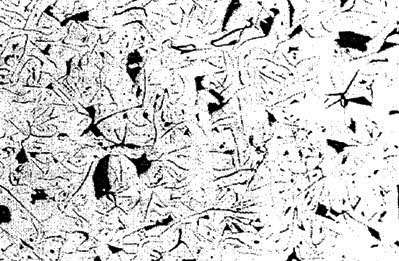 High silicon cast iron has good castability. This characteristic is connected with higher Si content. Pry the rule, for casting, the most usable alloy is with eutectic content which is best because of low melting point and small solidification temperature interval.

Corrosion resistance characteristics of high silicon cast depends on the formed film silicon dioxide (SiO2). Ferrum atoms excrete from the silicon-ferritic lattice and residual Si atoms are oxidized and so forms the protective film of silicon oxide which stops further corrosion. High silicon cast iron is resistant to sulphuric and nitrogen acid action though a very large range of concentrations and temperatures, and also to mixes of sulphuric and nitrogen acids. High silicon cast iron is resistant to phosphoric acid action at room temperature, organic acids at all temperatures and concentrations of nitrogen oxides at higher temperatures, carbon disulfide solution at higher temperatures, solutions of aluminum chloride, aldehyde and other aggressive mediums.