A continuous drive for lighter and better performing materials in the aerospace industry has led to progressive work regarding aluminum alloys.
Testing of the durability of the material through fatigue testing is absolutely essential to ensure the application of the material is suitable before moving through the expensive design process and further into product realization.

The continuous evolution of military and civilian aircraft structures has lead to significant improvements in aircraft performance. However, the improvements in the design characteristics of the newly developed aircraft structures are limited by the properties of the presently used materials. Thus, there exists a well-defined need to understand and improve the properties of currently used materials in the Aerospace industry.

Aluminum and its alloys are being used successfully in a wide range of applications, from packaging to aerospace industries. Due to their good mechanical properties and low densities, these alloys have an edge over other conventional structural materials. Aluminum alloys continue to be the dominating structural materials for aircraft. In most of the aircraft, the air-frame consists of about 80% aluminum by weight.

Now-a-days, the cost reduction for aircraft has become an important criterion in many airlines and the selection of materials is done on the basis of life cycle approach. Composites are very competitive materials for aircraft structural applications. However, they are generally considered to have higher initial cost, require more manual labor in their production and are more expensive to maintain.

Fatigue is the most important failure mode to be considered in a mechanical design. The physical process of fatigue is described in Figure 1. Under the action of oscillatory tensile stresses of sufficient magnitude, a small crack will initiate at a point of the stress concentration. Once the crack is initiated, it will tend to grow in a direction orthogonal to the direction of the oscillatory tensile loads. 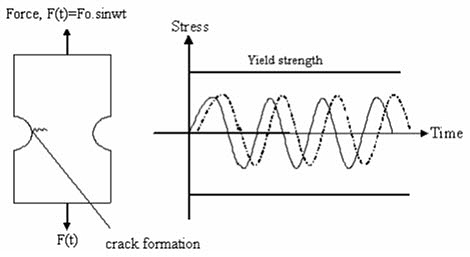 Fatigue failures are often catastrophic; they come without warning and may cause significant property damage as well as loss of life. The goal of such new elements in the design process is to perform fatigue and durability calculations much earlier, thereby reducing or removing the need for expensive redesign later on. Actually, fatigue damage is related to cycle amplitudes or ranges and not to peak values. Therefore, in any kind of loading, fatigue damage is caused by statistical properties such as amplitudes and mean values.

In the paper of Varly E.A. et al., the effect of different ageing treatments on the fatigue crack growth behavior of AA6013 aluminum alloy was investigated. C(T) (Compact Tension) specimens prepared in L-T and T-L orientations were aged under 3 different conditions:
– T651-peak aged (as received),
– T42-natural aged (solution heat treated at 538°C for 90 min, water quenched and aged at room temperature for 96 h),
– and overaged (T42 temper over ageing at 245°C for 12 h-this condition is termed TOA in this paper).

Electrical conductivity and hardness measurements were performed to verify the heat treatments. Fatigue crack growth tests were performed on the samples with a stress ratio of R = 0.1 and a frequency of 4 Hz.

The fatigue crack growth rate diagrams (da/dN vs ΔK) for the 3 ageing conditions are given in Figures 2 and 3 for T-L and L-T orientations, respectively. 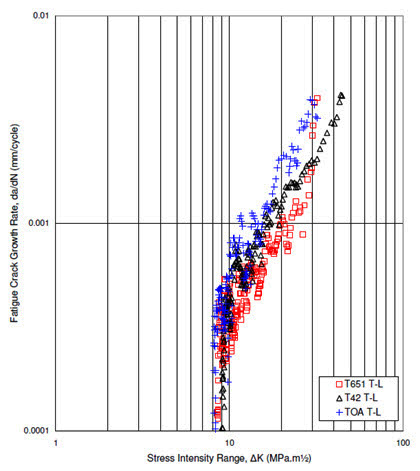