A critical property of nickel-based superalloys is their resistance to fatigue-crack propagation, particularly at service temperatures.
Many nickel-based superalloys are subject to formation of cracks or incipient cracks, either in fabrication or in use, and that the cracks can actually propagate or grow while under stress during the use in structures such as gas turbines and jet engines.

Nickel-based superalloys are widely used in turbines for both aerospace and land-based power-generation applications, due to their exceptional elevated-temperature strength, high resistance to creep, oxidation, and corrosion, and good fracture toughness. However, a critical property of these alloys is their resistance to fatigue-crack propagation, particularly at service temperatures.

In engine applications, there are often two components to this problem:

Fatigue results in rapid, and often unpredictable, failures due to the propagation of fatigue cracks in blade and disk components under high-frequency loading, where the cracking initiates from small defects, in many instances resulting from fretting or foreign-object damage. Due to the high vibrational frequencies involved, even cracks growing at slow per-cycle velocities can propagate to failure in short time periods, possibly within a single flight segment. Consequently, HCF-critical turbine-engine components must be operated below the fatigue-crack initiation or growth thresholds, such that cracking cannot occur within ~109 cycles.

Nickel-based superalloys have been used extensively in jet engines, in land based gas turbines and other machinery where they must retain high strength and other desirable physical properties at elevated temperatures of 1000°F (540°C) or more. Many of these alloys contain a γ’ precipitate in varying volume percentages. The γ’ precipitate contributes to the high performance properties of such alloys at their elevated use temperatures.

A problem which has been recognized to a greater and greater degree with many nickel-based superalloys is that they are subject to formation of cracks or incipient cracks, either in fabrication or in use, and that the cracks can actually propagate or grow while under stress as during use of the alloys in such structures as gas turbines and jet engines. The propagation or enlargement of cracks can lead to part fracture or other failure and the consequences of failures of the moving mechanical part due to crack formation and propagation can be particularly hazardous.

A principal finding of a NASA sponsored study was that the rate of propagation based on fatigue phenomena or in other words, the rate of fatigue crack propagation (FCP), was not uniform for all stresses applied nor to all manners of applications of stress. More importantly, the finding was that fatigue crack propagation actually varied with the frequency of the application of stress to the part where the stress was applied in a manner to enlarge the crack.

More surprising still was the magnitude of the finding from the NASA sponsored study that the application of stress of lower frequencies rather than at the higher frequencies previously employed in studies, actually increased the rate of crack propagation. In other words the NASA study verified that there was a time dependence in fatigue crack propagation. Further, the time dependence of fatigue crack propagation was found to depend not on frequency alone but on the time during which the member was held under stress, so-called hold-time.

To date, the grain-boundary engineering approach has been shown to be particularly successful in promoting fracture resistance in specific cases, notably in the context of intergranular stress-corrosion cracking and creep. However, its effect on the fatigue resistance has largely been unexplored.

According to one study, ambient temperature, smooth-bar, tension-tension fatigue lives for two γ / γ’ superalloys were reported to be increased by a factor of ~1.5 in an Fe-based alloy by increasing the fraction of special boundaries from 20 to 65 pct and by a factor of 3 in a Ni-based alloy by increasing this fraction from 9 to 49 pct, although no mechanistic explanation was presented.

Clearly, the effectiveness of grain-boundary engineering will depend upon the nature of the crack path, specifically, the preponderance of intergranular versus transgranular cracking. In light of this, the objectives of the studies was to investigate, the feasibility of using grain boundary engineering processing to promote resistance to fatigue-crack propagation, particularly at near-threshold levels, in a new polycrystalline nickel-based disk alloy, ME3 (Ni-Co-Cr Alloy). Specifically, the crack growth rates and threshold behavior of large (8 to 20 mm) through-thickness cracks were examined over a range of temperatures (25°C, 700°C, and 800°C) in order to enhance the incidence of intergranular crack growth, Figure 1. 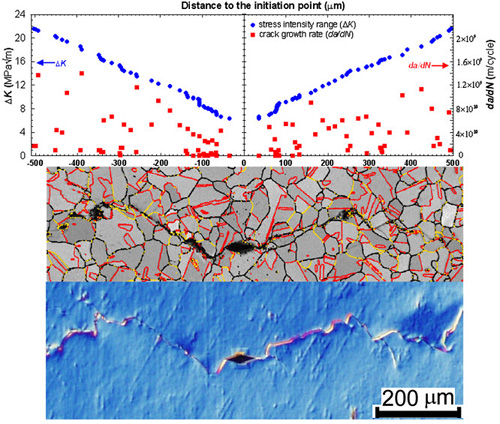