The fatigue behavior of a material is usually determined by conducting axial (tension and compression) and sometimes torsional fatigue experiments at the service temperature.
Between the temperatures of 150°C and 250°C the material strength decreases rapidly for almost all of the cast aluminum alloys as expected.

The fatigue behavior of a material is usually determined by conducting axial (tension and compression) and sometimes torsional fatigue experiments at the service temperature. In reality, however, engineering components are subjected to loads in multiple directions, and these loads produce complex states of stress and strain within the component.

The influence of stress ratio and thickness on the fatigue crack growth rate for aluminum alloy 2017-T4 can be seen in Figure 1. The data was obtained using a specimen thickness of 1.8 and 10 mm tested at stress ratios of R=0 and R=0.4. The fatigued fracture surface of 10 mm thickness specimen tested under R=0 is superimposed in the figure for comparison. 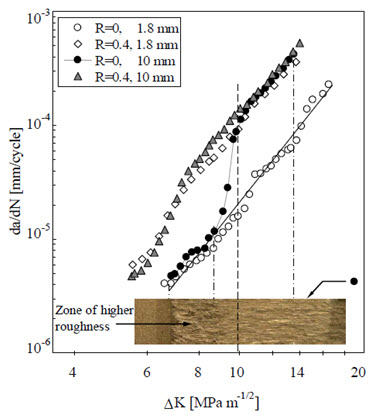 Figure 2 shows that specimen thickness has no significant influence in the crack growth behavior of this alloy except for R=0 and for ΔK values above 9 MPa m1/2.

In the work done by M.B.Grieb et al., the monotonic tensile tests of the aluminum cast alloys were carried out at room temperature after the standardized specimens had been pre-aged at defined temperatures for 500 hours in order to determine the effect of aging on the tensile strength properties of the aluminum alloys examined.

500 hours were used to establish a completely over-aged material condition at least at the highest temperatures applied. The presented values of the ultimate tensile strength in Figure 2 are the mean values from five performed tensile tests.

Between the temperatures of 150°C and 250°C the material strength decreases rapidly for almost all of the cast aluminium alloys as expected. Only in the case of AlMg3Si1(Sc,Zr)-T5, the annealing is very much delayed, even at the highest temperature of 350°C.

AlSi7Mg-T7 shows the highest reduction of the tensile strength with temperature. After 500 hours at an aging temperature of 200°C or higher, the tensile strength has reached a minimum, and there with a stable condition. At temperatures of 150°C and higher, more and more incoherent Mg2Si particles are formed from coarsening, explaining the strength decreases of the AlSiMg alloys.

At 200°C and higher incoherent Al2Cu appears and reduces the tensile strength in the case of AlSiCu. Al3Sc is responsible for precipitation-strengthening in AlMg3Si(Sc,Zr)-T5 and is stable up to 300°C. Hence, it can be summarized that strength reduction due to aging is slow for this alloy. 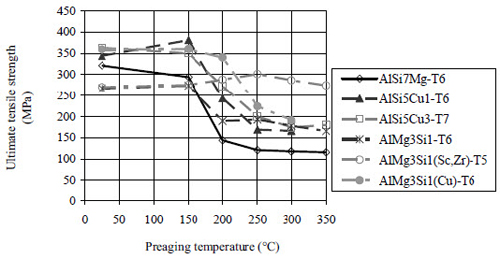 Figure 2: Ultimate tensile strength of aluminum castings at room temperature as a function of preaging temperature after 500h aging

The focus of the study is put on the resistance against thermomechanical fatigue (TMF) loading, which is typical of the cylinder head application, and the development of an accurate TMF life prediction model, which takes the change of the mechanical properties during TMF into account.

A near-component-shaped specimen, the so called “valve bridge sample” was developed and TMF tested in a special testing system which closely matches the real component loading situation. Furthermore the thermal and mechanical properties of the alloys were determined as a function of time, temperature and number of TMF loading cycles.

The mechanical properties obtained in tensile tests on standardized specimens after 500 hours of annealing at various aging temperatures indicate that the influence of the aging temperature is high for AlSi7Mg-T6 and low for AlMg3Si1(Sc,Zr)-T5 compared to the other aluminum alloys studied.

Furthermore, the TMF tests on the valve bridge samples showed that the AlSiCu alloys possess a higher resistance against TMF crack initiation in terms of the number of TMF cycles necessary to form a detectable fatigue crack as compared to AlMgSi and the AlSiMg alloys. The aging of the microstructure, due to the combined thermal exposure and cyclic plastic deformation occurring in the TMF tests, was proven macroscopically by 2-dimensional hardness measurements on the surface which are heated in the TMF loading system, and microstructurally by TEM examinations of samples taken from the critical location of the valve bridge samples.

Several numerical simulations with different assumptions for the mechanical properties, i.e. constant values related to the starting condition, constant values from the final condition and changing values according to the aging model, were run for TMF loading of near-component-shaped specimens made of the aluminum alloys AlSi7Mg and AlSi5Cu3.

The resulting life times were compared with the experimental results of the TMF tests. The comparison showed that the incorporation of the aging model improves the predictive capability and accuracy of both damage evolution models. This holds true in particular for AlSi7Mg, since the mechanical properties of this alloy change rapidly within the temperature range of the TMF loading.