ECAP is one of the most commonly employed severe plastic deformation process to drive nano or ultrafine grained microstructure at low homologous temperatures.
ECAP is most suitable for materials used in industrial scale application, the process works by introducing a large shear strain by repeated extrusion steps.

Among the different procedures in use for the production of nanostructured materials, only severe plastic deformation (SPD) processes exhibit a potential for producing relatively large samples suitable for industrial applications. Severe plastic deformation is metal forming processes in which an ultra-large plastic strain is introduced into a bulk metal in order to create nano- or ultrafine- grained structure at low homologous temperatures (typically below 0.3 of the melting temperature).

In order to obtain the smallest microstructural sizes plastic strains of more than 600 to 800% are necessary. Such high degrees of plastic deformation are possible because one sample can be subjected several times to SPD in order to accumulate the total amount of plastic strain.

Equal Channel Angular Pressing (ECAP) is one of the most employed methods of Severe Plastic Deformation (SPD); it can be applied to a variety of metals and alloys in order to obtain ultrafine grains and good mechanical and physical properties. The recent literature shows intense and growing interest in some fundamental aspects of SPD techniques, viz., the generation of ultrafine grains and the mechanisms underlying the high levels of strength observed. Aluminum and its alloys, Cu and Ti are the most employed materials in SPD-ECAP studies, with Ti being seriously considered for orthopedic implants.

The current trend in research and development of Ti alloys for biomedical applications is the development of alloys with low elastic modulus, free of toxic and allergic elements such as Al and V, while maintaining the already good mechanical properties of Ti-6Al-4V.

For producing large size stock that is suitable for industrial application, the equal channel angular pressing (ECAP) process is most suitable. This process involves introducing large shear strain in the work piece by pushing it through a die that consists of two channels with the same cross sectional shape that meet at an angle to each other. Since the cross-sections of the two channels are the same, the extruded product can be re-inserted into the entrance channel and pushed again through the die. Repeated extrusion through the ECAP die accumulates sufficient strain to breakdown the microstructure and produce ultra-fine grain size.

The principle of ECAP is illustrated schematically in Figure 1. For the die shown in Figure 1, the internal channel is bent through an abrupt angle, Φ, and there is an additional angle, Ψ, which represents the outer arc of curvature where the two channels intersect. The sample, in the form of a rod or bar, is machined to fit within channel and the die is placed in some form of fuss so that the sample can be pressed through the die using a plunger.

The nature of the imposed deformation is simple shear which occurs as the billet passes through the die. The retention of the same cross-sectional area when processing by ECAP, despite the introduction of very large strains, is the important characteristic of SPD processing and it is this characteristic which distinguishes this type of processing from conventional metal-working operations such as rolling, extrusion and drawing. Since the cross-sectional area remains unchanged, the same billet may be pressed repetitively to attain exceptionally high strain. 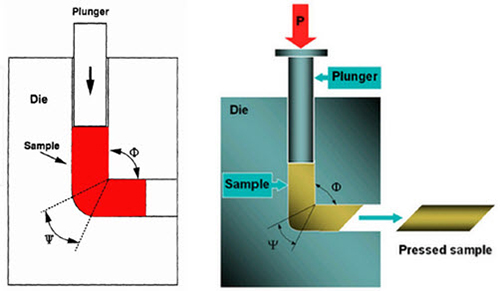