The shape and magnitude of the stress-strain curve of a metal will depend on its composition, heat treatment, prior history of plastic deformation, and the strain rate, temperature, and state of stress imposed during the testing. The parameters, which are used to describe the stress-strain curve of a metal, are the tensile strength, yield strength or yield point, percent elongation, and reduction of area. The first two are strength parameters; the last two indicate ductility.

An example of the engineering stress-strain curve for a typical engineering alloy is shown in Figure 1. From it some very important properties can be determined. The elastic modulus, the yield strength, the ultimate tensile strength, and the fracture strain are all clearly exhibited in an accurately constructed stress strain curve.

Figure 1: An example of the engineering stress strain curve for a typical engineering alloy

The elastic modulus, E (Young’s modulus) is the slope of the elastic portion of the curve (the steep, linear region) because E is the proportionality constant relating stress and strain during elastic deformation: σ = Eε.
The 0.2% offset yield strength is the stress value, σ0.2%YS of the intersection of a line (called the offset) constructed parallel to the elastic portion of the curve but offset to the right by a strain of 0.002. It represents the onset of plastic deformation.

The fracture strain is the engineering strain value at which fracture occurred. 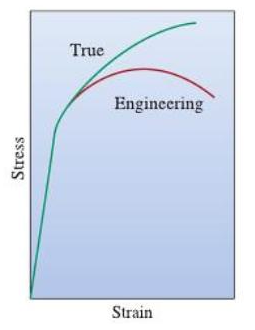