Zirconium is a common choice for nuclear applications due to its low thermal neutron capture cross section which is about 30 times less than that of stainless steel.
A specific key useful benefit of zirconium alloys are their specific resistance to acids including hydrochloric, sulfuric and phosphoric acids which means applications which require direct contact with these substances is particularly suited.

The main properties of Zr and the Zr alloys are given in Table 1. It should be noted that one of the main reasons for selecting Zr as a nuclear material is its low thermal neutron capture cross section which is about 30 times less than that of stainless steel giving a better neutron efficiency in water reactors. The main characteristics of Zr metallurgy come from its high reactivity with oxygen, from the different type of chemical interactions with the alloying elements (complete solubility or intermetallic compound formation) and from its strongly anisotropic hexagonal crystal structure, the latter leading to the development of a textured material after thermo-mechanical processing.

One of the earliest applications for zirconium was in the handling of hydrochloric acid. Zirconium is still widely used in this area. The corrosion rate of zirconium is less than 5mpy at all concentrations and temperatures well in excess of the boiling point. Even in 37% HCI, zirconium does not corrode appreciably until temperatures of 130°C are reached (see Figure 1). Zirconium’s corrosion-resistant behavior in pure hydrochloric acid is superior to any other engineering metal. 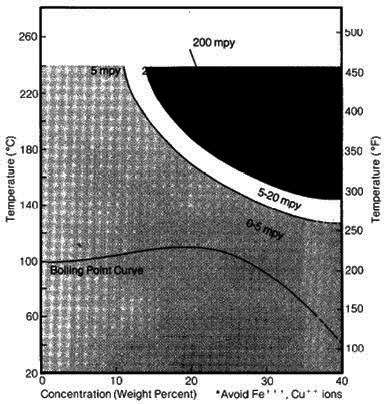 Applications of zirconium in hydrochloric acid

Current applications of zirconium equipment in hydrochloric acid include pumps, valves, piping, condensers, and evaporators. Zirconium heat exchangers, pumps, and agitators have been used for over 20 years in an azo dye coupling reaction. Besides being very corrosion resistant in this environment, zirconium does not plate out undesirable salts which would change the color and stability of the dyes. Heat exchangers made of zirconium are used by chemical companies in the production of polymers. Other hydrochloric applications where zirconium has been used are phthalic-hydrochloric acid and wet hydrogen chloridechlorine atmospheres. A very important application for zirconium is in processes that cycle between hydrochloric or sulfuric acid and alkaline solutions.

Applications of zirconium in sulfuric acid

Zirconium is used extensively in 40-70 weight percent sulfuric acid at elevated temperatures. Zirconium has been used to replace impervious graphite heat exchangers and lead heating coils in an environment containing sulfuric acid, zinc and sodium sulfates, hydrogen sulfide, and carbon disulfide. Zirconium has been used in these applications for over ten years without corrosion problems. Some other examples of sulfuric acid applications include ester manufacturing, steel pickling, alcohol stripping towers and hydrogen peroxide manufacturing. 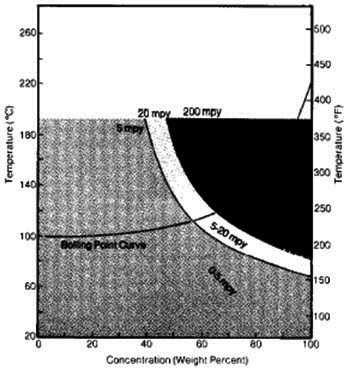