Corrosion is the chemical reaction of a metal, in this case aluminum, with its environment, which leads to the deterioration of the properties of metals, aluminum in this case. Aluminum is a very reactive metal, but it is also a passive metal. This contradictory nature is explainable because nascent aluminum reacts with oxygen or water and forms a coherent surface oxide which impedes further reaction of aluminum with the environment.

Corrosion is the chemical reaction of a metal, in this case aluminum, with its environment, which leads to the deterioration of the properties of metals, aluminum in this case. Aluminum is a very reactive metal, but it is also a passive metal. This contradictory nature is explainable because nascent aluminum reacts with oxygen or water and forms a coherent surface oxide which impedes further reaction of aluminum with the environment.

Aluminum is chemically very reactive. For example, powdered aluminum is used as rocket propellant for propulsion of the space shuttle’s solid fuel rockets. Additionally, the reaction of aluminum with water releases a tremendous amount of energy:

Corrosion is the reaction of aluminum with water and the subsequent deterioration of its properties. Corrosion, by definition, is a slow process, requiring days or years to occur to a noticeable extent, as opposed to similar electrochemical reactions such as etching, brightening, or anodizing which occur in minutes or less.

Aluminum alloys may corrode via several different pathways. Recognizing the pathway or the forms of aluminum corrosion is an important step to determine the appropriate remedy for each probe.

Atmospheric corrosion is defined as the corrosion or degradation of material exposed to the air and its pollutants rather than immersed in a liquid. This has been identified as one of the oldest forms of corrosion and has been reported to account for more failures in terms of cost and tonnage than any other single environment. Many authors classify atmospheric corrosion under categories of dry, damp, and wet, thus emphasizing the different mechanisms of attack under increasing humidity or moisture.

Corrosivity of the atmosphere to metals varies greatly from one geographic location to another, depending on such weather factors as wind direction, precipitation and temperature changes, amount and type of urban and industrial pollutants, and proximity to natural bodies of water. Service life may also be affected by the design of the structure if weather conditions cause repeated moisture condensation in unsealed crevices or in channels with no provision for drainage.

General corrosion, or uniform corrosion, occurs in the solutions where pH is either very high or very low, or at high potentials in electrolytes with high chloride concentrations. In acidic (low pH) or alkaline (high pH) solutions, the aluminum oxide is unstable and thus non-protective.

Economically, galvanic corrosion creates the largest number of corrosion problems for aluminum alloys. Galvanic corrosion, also known as dissimilar metal corrosion, occurs when aluminum is electrically connected to a more noble metal, and both are in contact with the same electrolyte.

Crevice corrosion requires the presence of a crevice, a salt water environment, oxygen (Fig. 1). The crevice can result from the overlap of two parts, or gap between a bolt and a structure. When aluminum is wetted with the saltwater and water enters the crevice, little happens initially. Over time, inside the crevice oxygen is consumed due to the dissolution and precipitation of aluminum. 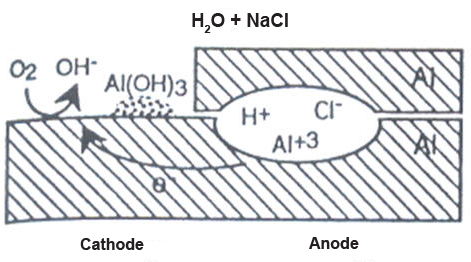 Corrosion of aluminum in the passive range is localized, usually manifested by random formation of pits. The pitting-potential principle establishes the conditions under which metals in the passive state are subject to corrosion by pitting.

Pitting corrosion is very similar to crevice corrosion. Pitting of aluminum alloys occurs if the electrolyte contains a low level of chloride anions, and if the alloy is at a potential above the “pitting potential.” Pitting initiates at defects on the surface of the aluminum, such as at second phase particles or on grain boundaries.

In designing aluminum and aluminum alloys for satisfactory corrosion resistance, it is important to keep in mind that ions of several metals have reduction potentials that are more cathodic than the solution potential of aluminum and therefore can be reduced to metallic form by aluminum. For each chemical equivalent of so-called heavy-metal ions reduced, a chemical equivalent of aluminum is oxidized. Reduction of only a small amount of these ions can lead to severe localized corrosion of aluminum, because the metal reduced from them plates onto the aluminum and sets up galvanic cells.

The more important heavy metals are copper, lead, mercury, nickel, and tin. The effects of these metals on aluminum are of greatest concern in acidic solutions; in alkaline solutions, they have much lower solubilities and therefore much less severe effects.

Exfoliation corrosion is a special form of intergranular corrosion which occurs when the grains are flattened by heavy deformation during hot or cold rolling, and where no recrystallization has occurred. Exfoliation is characteristic for the 2000 (Al-Cu), 5000 (Al-Mg), and 7000 (Al-Zn-Mg) series alloys which have grain boundary precipitation or depleted grain boundary regions.

The remedy for exfoliation is similar to above for IG corrosion. To prevent the exfoliation of alloy 7075-T6, the newer alloy 7150-T77 can be substituted wherever 7075-T6 is used.

Aluminum is very stable is neutral water; however it will corrode in either acidic or alkaline waters. To prevent erosion-corrosion, one may change the water chemistry or reduce the velocity of the water, or both. For the water chemistry, the pH must be below 9, and the carbonate and the silica levels must be reduced.

Fatigue strengths of aluminum alloys are lower in such corrosive environments as seawater and other salt solutions than in air, especially when evaluated by low-stress long-duration tests. Like SCC of aluminum alloys, corrosion fatigue requires the presence of water. In contrast to SCC, however, corrosion fatigue is not appreciably affected by test direction, because the fracture that results from this type of attack is predominantly transgranular.

The propagation depends on where and how the alloy is used. The filament must be initiated by chlorides, and then it proceeds by a mechanism similar to crevice corrosion. The head is acidic, high in chlorides, and deaerated and is the anodic site. Oxygen and water vapor diffuse through the filiform tail, and drive the cathodic reaction. Filiform corrosion can be prevented by sealing defects with paint or wax, and keeping the relative humidity low.

Microbiological Induced Corrosion (MIC) applies to a corrosive situation which is caused or aggravated by the biological organisms. A classic case of MIC is the growth of fungus at the water/fuel interface in aluminum aircraft fuel tanks. The fungus consumes the high octane fuel, and excretes an acid which attacks and pits the aluminum fuel tank and causes leaking. The solution for this problem is to control the fuel quality and prevent water from entering or remaining in the fuel tanks. If fuel quality control is not feasible, then fungicides are sometimes added to the aircraft fuel.