Copper demonstrates excellent corrosion resistance in marine environments as well as showing strong abilities to withstand several other key localized corrosion forms which could potentially lead to failure.
Commonly weathered copper will go through a range of visual appearance transformations including the development of a brown patina within a few days of exposure and this will develop into the recognized green color over a period of 7-9 years.

Corrosion is the electrolytic action of moisture and other dissolved ions of the atmosphere on the metals. The corrosive effects of outdoor environments, for instance, the salty coastal atmosphere, acid rain and ice, present unique challenges to the material and lead to degradation and eventually to failure.

It is known that the corrosion mechanism of copper is strongly dependent on the presence of chloride ions. Several attempts to describe the corrosion mechanism of copper in different chloride containing media have been reported in literature. The main differences among the available models are the descriptions of the initial electro-dissolution reactions of the bare copper. Three reversible mechanisms have been considered:

Reactions (1) and (2) show the direct formation of cupric chloride from copper, while the third reaction represents the dissolution of copper to cuprous chloride in the first step.

The excellent marine corrosion resistance of copper has been known and used to good effect for centuries. Copper alloys used in sea water service have low general corrosion rates but also a high resistance to many localised forms of corrosion which can lead to rapid failure.

Copper based alloys are frequently used in sea water systems for applications such as heat exchangers, pumps, valves, pipes, fasteners. Depending on the applications and the need for mechanical characteristics, CuNi alloys (i.e. CuNi10Fe1Mn) or Nickel Aluminium Bronzes can be used. Despite the emergence in recent years of other materials that offer improved properties such as stainless steels, based nickel alloys or titanium, copper alloys continue to be widely used. They have indeed an attractive price and offer interesting mechanical characteristics associated to a relatively good resistance to corrosion in sea water.

Copper alloys attain their corrosion resistance by the formation of protective surface films. These are visible to the naked eye, form gradually over a period of time – both in the atmosphere and in seawater – and are due to a reaction between the air or seawater and the surface of the alloy.

In the atmosphere, copper develops a brown patina in a few days, which gradually weathers into a green patina. Continued weathering results in conversion of sulphide films to the basic copper sulphate patina which, when complete, gives the distinctive light green colour of older copper roofs. In marine climates, the surface patina will also contain some copper chloride. The eventual development of the light green patina can take 7 to 9 years in marine environments.

Data from exposure tests of up to 20 years duration in various marine sites show a high corrosion resistance to the marine atmosphere for a variety of copper alloys and has found corrosion rates in the range 1.3-26×10-4 mm/year, apart from alloys susceptible to dezincification where the corrosion rate was much higher.

Reinhart found that copper and its alloys of aluminum, silicon, tin, beryllium, and nickel had significantly lower long-term corrosion rates after 18 months compared to those specimens measured after only 6 months of exposure to seawater (Figure 1).

The only exception was Alloy C28000, Muntz metal, which exhibited a slightly higher corrosion rate after 18 months as compared to 6 months. Alloy C44300, Admiralty, was in the group characterized by a decreasing corrosion rate with time. The long-term, steady-state corrosion rate for copper and copper alloys, except for Muntz metal, is on the order of 1 mpy (0.025 mm/y) or less, and for the copper-nickel alloys on the order of 0.05 mpy (0.001 mm/y), within those velocities that each alloy can tolerate without damage to the protective corrosion product film.

Data from short-term (less than 1 y) corrosion tests on copper alloys in seawater, while useful for certain alloy-to-alloy comparisons in research investigations, can be very misleading if they are used to estimate service life. Short-term data tend to underestimate long-term durability. Only the long-term, steady-state corrosion rate can be used to provide reasonable service life projections for copper alloys. 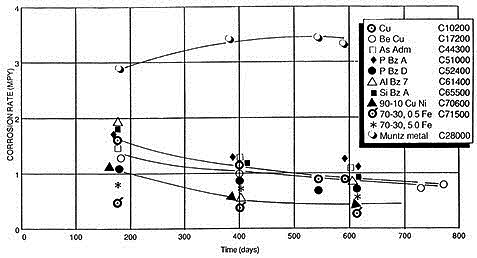 Figure 1:Corrosion rates for copper alloys for up to 800-day seawater exposures