Copper and copper alloys are specific in their corrosion behavior in that the initial corrosion rate of this group of materials is relatively high until protective layers form according to the alloy and the composition of the electrolytic solution.
One prime example of a material group which has found widespread use within the marine environment due to its excellent corrosion resistance are the copper-nickel alloys.

Although the initial corrosion rate of copper and its alloys may be high, it decreases as protective product layers are formed. The corrosion resistance provided by a layer of reaction product varies according to the alloy and the composition of the electrolytic solution, and the thickness and electrical properties of a passive film are dependent on this composition.

During the last decades, many thousands of tons of the copper-nickel alloy (UNS C70600, CuNi 90/10) have been installed in different marine engineering structures mainly as piping for seawater handling and heat exchangers in the shipbuilding, offshore, power, and desalination industries. This alloy that has been adopted by various standards reveals sufficient physical and mechanical properties and is easily fabricated. In clean oxygenated seawater, this alloy has remarkable resistance to uniform and localised corrosion.

Due to the release of copper ions and the structure of oxide layers that are established during natural corrosion processes, copper-nickel provides bacteriostatic properties and is resistant to microfouling. In many cases, the resistance to erosion-corrosion of the alloy allows its economical use as a piping material.

Copper-nickel 90/10 has a very good resistance to uniform and local corrosion in seawater and, as opposed to other copper alloys, is not as susceptible to stress corrosion cracking. The required corrosion allowance for seawater applications for 20 years is 0.5 mm (Lloyd´s Register). 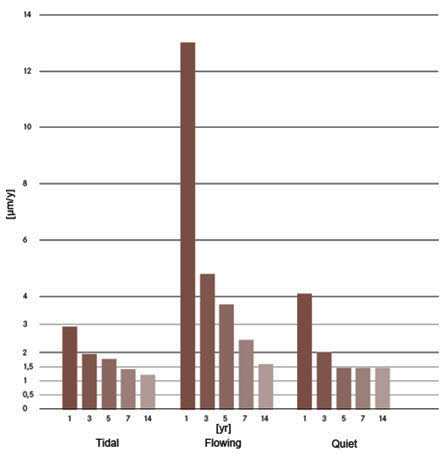 Also, a high strength copper nickel alloy (Nibron) and a Nickel Aluminium Bronze (A45) are respectively compared to classical CuNi 90-10 (CuNi10Fe1Mn) and CuAl9Ni3Fe2, elsewhere well known for their experimental feedback in sea water.

When pits do occur, they tend to be shallow and broad in nature and not the undercut type of pitting which can be expected in some other types of alloys. De-nickelification has only occasionally been observed in copper-nickel alloys, and then usually in heat exchangers under low flow rates and heat transfer conditions.

Superior flow tolerance: Of the copper alloys, copper-nickel has one of the highest resistances to sea water flow velocity, as demonstrated by its wide use in piping systems, condensers and heat exchangers. However, excessive and persistent turbulence or abrasion can damage the protective film and must be avoided by good design and service conditions.

Galvanic behaviour: Copper-nickel alloy lies within the mid-range of the galvanic series for sea water and is less noble than stainless steel, high nickel alloys and titanium and more noble than aluminium, zinc and steel. It is largely compatible with other copper alloys providing the area ratios are not extreme. Biofouling resistance can be compromised if coupled to less noble alloys and, for optimum resistance, the copper-nickel should be electrically insulated from them.

Figure 3 is an iso-corrosion chart showing resistance to attack in air-free and aerated acid. Again, aeration, or the presence of oxidizing salts, increases the corrosion rate, but in non-aerated acid (open to the atmosphere with no attempt to deaerate or aerate), MONEL alloy 400 resists all concentrations, up to the boiling point (Figure 4).