Compacted graphite iron (CGI) along with lamellar graphite iron and spheroidal graphite iron define the three main classes of cast iron according to morphology.
An important measure for assessing the application of CGI is the machinability levels and through specific studies it was concluded that CGI is much more difficult to machine than standard grey cast irons.

The properties of grey iron, CGI and ductile iron are summarized in the following overview. 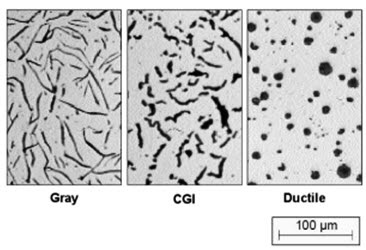 Figure 1: Grey iron, compacted graphite iron and ductile iron are differentiated by the shape of the graphite particlesIn addition to graphite structure differences, there are significant compositional differences between gray cast iron and CGI which are also largely responsible for the differences in the machinability of these two metals. The presence of sulfur in gray cast iron is considered to be a critical factor associated with the high machinability of this metal. During machining of gray cast iron, the sulfur alloyed in the metal, combines with manganese to form manganese sulfide (MnS) inclusions.

During cutting, the MnS inclusions are believed to assist in the chip breaking process as well to adhere to the cutting tool surface forming a lubricating layer which reduces friction, protects against oxidation and diffusion, and subsequently minimizes tool wear (especially at high cutting speeds). In machining of compacted graphite iron, formation of such a layer does not occur since the normal amount of sulfur added to CGI is around 0.01%, which is approximately ten times lower than that added to gray iron.

In addition, the residual sulfur in compacted graphite iron tends to combine with magnesium, (element added to enhance graphite nodulization), so there remains little sulfur free to combine with manganese and form the MnS protective layer. Thus the lack of sulfur in compacted graphite iron is believed to be a primary reason for the poorer machinability and higher tool wear associated with the machining of this metal. Due to these two factors (graphite morphology and sulfur concentration) the machinability of CGI is considerably lower, and tool wear is considerably higher than that experienced in gray cast iron machining.

Previously reported studies, show that tool life for milling and drilling operations of CGI can be one half, while tool life in CGI boring operations have been seen to be just one-tenth of that obtained in comparable machining operations with gray cast iron. Thus it is clear that obtaining a better understanding of the lubrication and fluid requirements needed for improving the machinability of CGI will greatly benefit its current and future use.

The subject of the studies of R.Evans, F.Hoogendoorn, and E.Platt was to investigate the machining properties of CGI, and the metalworking fluid properties and composition which impact and potentially extend tool life in CGI machining.

To study the differences in machinability between gray cast iron and CGI, machining tests were conducted on a Bridgeport V2XT machine using a standard water based metalworking fluid. The fluid used was an o/w macroemulsion which is known to provide high levels of lubrication in ferrous machining operations. Testing involved the drilling and subsequent reaming of Grade 450 compacted graphite iron as well as a Class 40 gray cast iron.

Assessment of the machinability of the metals was made by measurement of the cutting forces and tool wear occurring during the operation. Table 1 below shows the machining conditions used in this study.

Figure 2: Machining conditionsFrom the obtained results they summarized that the results of the machining tests clearly show the higher level of difficulty encountered in the machining of compacted graphite iron compared to the machining of standard gray cast irons. This was seen in both the cutting forces and tool wear measured. While it is understood that differences in graphite morphology is largely responsible for the differences in the machinability of CGI relative to gray cast iron, it is also believed and supported further by the SEM/EDX analysis conducted, that the lack of sulfur in CGI and the inability to form lubricating manganese sulfide inclusions during cutting, also give rise to the poor machinability of this metal.

While it is necessary to cast CGI with minimal sulfur content, it was shown that lubricating sulfur based additives can be utilized in the machining fluid to compensate for the lack of sulfur in the metal, and to provide enhanced lubrication necessary for reducing cutting forces and tool wear. The role of sulfur based additives in the metal working fluid in forming a protective lubricating layer on the workpiece and/ or tool surface during machining was supported by SEM/ DX analysis of the used tool. The analysis showed high sulfur content on the tool surface following machining.

This level of sulfur was found to be comparable in concentration to that found on the tool used for gray cast iron machining. It is also believed that the formation of a sulfur based tribological film requires a level of heat. This is supported by results of EDX analysis showing high sulfur levels on the cutting edge surface where high friction, heat generation and wear was occurring, in contrast to only trace sulfur levels at locations farther up on the tool rake face where minimal metal-metal contact occurs.