One of the main casting defects is hot tearing or hot cracking, or hot shortness. Irrespective of the name, this phenomenon represents the formation of an irreversible failure (crack) in the still semisolid casting. Although in most works hot tearing is considered as a phenomenon linked to the inadequate compensation of solidification shrinkage by melt flow in the presence of thermal stresses, there are more factors that could be involved in the formation of cracks at supersolidus temperatures.

This unique system of classification, based upon the morphology of the defect, is more logical than one based upon causes since it requires no prior assumptions to be made. Seven basic categories of defects have been established, each of which is identified by a letter:
A – Metallic Projections
B – Cavities
C – Discontinuities
D – Defective Surface
E – Incomplete Casting
F – Incorrect Dimensions or Shape
G – Inclusions or Structural Anomalies

Each category is divided into groups and sub-groups which are designated by numerals. Within each subgroup, a third numeral is assigned to specify each particular defect. Thus, every defect is described by a letter followed by three numerals.

The classification system itself is rather simple. The user may note, however, that some defects can logicality be classified under more than one category. Scabs, for example, are metallic projections (category A) yet they are classified as a sub-group (D 230) under surface defects. Similarly, sand inclusions (defect G 131) are also related by origin to several other defects. Generally speaking, this need cause no confusion in defect identification, particularly if diagnosis is made strictly on the basis of physical appearance without trying to first assign a name to the defect.

One of the main defects is hot tearing or hot cracking, or hot shortness. Irrespective of the name, this phenomenon represents the formation of an irreversible failure (crack) in the still semisolid casting. Although hot tearing is most often considered as a phenomenon linked to the inadequate compensation of solidification shrinkage by melt flow in the presence of thermal stresses, there are more factors that could be involved in the formation of cracks at supersolidus temperatures.

From many studies started already in the 1950s, and reviewed by Novikov and Sigworth, it appears that hot tears initiate above the solidus temperature and propagate in the interdendritic liquid film. In the course of solidification, the liquid flow through the mushy zone decreases until it becomes insufficient to compensate for the solidification shrinkage at which point the cavities (pores) are formed. Cracks can initiate on these pores. The fracture has a bumpy surface covered with a smooth layer and sometimes with solid bridges that connect or have connected both sides of the crack.

Industrial and fundamental studies show that hot tearing occurs in the late stages of solidification when the volume fraction of solid is above 85 to 95 pct and the solid phase is organized in a continuous network of grains. It is also known that a fine grain structure and controlled casting conditions (without large temperature and stress gradients) help to avoid hot cracking.

During direct-chill (DC) casting of aluminum alloys, the primary and secondary cooling causes strong macroscopic thermal gradients in the billet/ingot, which leads to the uneven thermal contraction in different sections of the billet/ingot. As a result, macroscopic stress causes distortion of the billet/ingot shape (e.g., butt curl, butt swell, rolling face pull-in) or may trigger hot tearing and cold cracking in the weak sections.

The terms “hot” or “cold” refer to the temperature range where the cracking occurs, in the semisolid mushy zone or below the solidus, respectively. In DC casting, the name “mushy zone” is frequently applied to the entire transition region between liquidus and solidus, which is misleading, as the semisolid mixture in the top part of the transition region is actually slurry, because the newly formed grains are still freely suspended in the liquid. Only after the temperature has dropped below the coherency temperature is a real mush formed. On the microscopic level, the solidification shrinkage and thermal contraction impose strains and stresses on the solid network in the mushy zone, which creates the conditions for hot tearing.

Places where hot-tearing cast defects type occur most frequently are shown at Figure 1. 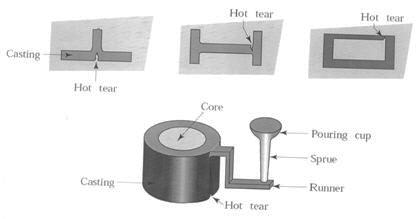 The deformation behavior of the mush is very critical for the formation of hot tears. The link between the appearance of hot tears and the mechanical properties in the semisolid state is obvious and has been explored for decades.

Another important correlation –between the hot cracking susceptibility and the composition of an alloy– has been established on many occasions. A large freezing range of an alloy promotes hot tearing because such an alloy spends a longer time in the vulnerable state in which thin liquid films exist between the dendrites. The liquid film distribution is determined by wetting of grain boundaries, i.e., by surface tension between liquid and solid phases. When the surface tension is low and wetting is good, the liquid tends to spread out over the grain boundary surface, which strongly reduces the dendrite coherency, weakens the mush, and may promote hot tearing.

Much effort has been devoted to the understanding of the hot tearing phenomenon and many scientist researched it (Novikov, Sigworth, Eskin etc).

A summary of hot tearing mechanisms is the following.

2. Nucleation
• Liquid film or pore as stress concentrator
• Oxide bi-film entrained in the mush
• Vacancy clusters at a grain boundary or solid/liquid interface

Over the years, different macroscopic and mesoscopic parameters, such as stress and strain, were considered as critical for the development of hot tearing. Today, the mesoscopic strain rate is believed to be the most important factor and some modem models are based on it. The physical explanation of this approach is that semisolid material during solidification can accommodate the rearrangement, and filling of the gaps and pores with the liquid. All these processes require some time, and the lack of time will result in fracture. Therefore, there exists a maximum strain rate that the semisolid material can endure without fracture during solidification. Prokhorov was probably the first to suggest a criterion based on this approach. More recently, an elaborate, strain-rate-based hot tearing criterion was proposed by Rappaz et al.

On the mesoscopic and microscopic level, the important factor is believed to be the feeding of the solid phase with the liquid. Within this approach, the hot tear will not occur as long as there is no lack of feeding during solidification. Niyama and Feurer use hindered feeding as a basis for their porosity and hot tearing criteria. The feeding depends on the permeability of the mush, which is largely determined by the structure. Later, a two-phase model of the semisolid dendritic network, which focuses on the pressure depression in the mushy zone, is suggested to describe the hot tear formation. This approach treats the semisolid material as solid and liquid phases with different levels of stress and strain.

The pressure drop of the liquid phase in the mush is considered as a cause of a hot tear. An extension of the two-phase model, which includes plasticity of the porous network, is also reported. These models do not distinguish between the pore formation and the crack initiation, the void being considered as the crack nucleus, although the pores should not necessarily develop into a crack. The crack may nucleate or develop from another defect and then propagate through a chain of pores. Logically, bridging and grain coalescence, which determine the transfer of stress and limit the permeability of the mush, are the other important microscopic factors for the development of hot tearing. 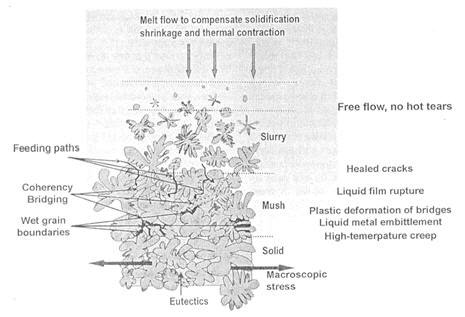