Specific to surgical implants, metallic materials have a range of uses however some serious challenges still exist such as the release of toxic metallic ions into bone or tissue through corrosion or wear processes.
Biodegradable materials offer a very real alternative as it means less harmful effect on the patient and potentially avoids repeated surgical procedures to remove the parts once healing is complete.

A variety of metallic biomaterials including titanium alloys, stainless steels, and cobalt-chromium-based alloys have been widely adopted as implant materials, because they can be used for load-bearing applications due to their inherent mechanical stability. However, the release of toxic metallic ions or particles by corrosion or wear processes can have undesirable effects on the cells and bone tissues.

Moreover, the metallic implants, such as pins, screws, and plates for repairing the defects, have to be removed by a second surgery after the bone was healed. Since, the repeated surgery will increase the morbidity and the health costs, then, the use of biodegradable metallic implants with a good biocompatibility is expected to overcome the limitations of conventional metallic biomaterials and remove the second surgery.

On the other hand the traditional metallic implants are inert with the following disadvantages: 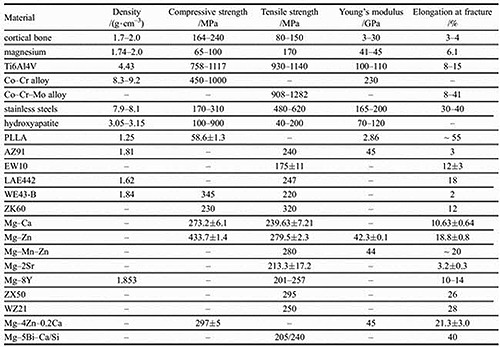 Table 1: Comparison of the mechanical properties of different biomatarials for implant applications

Magnesium and its alloys are metallic biomaterials that can be biodegradable in the bodily fluids and also it is an essential element for bone metabolism and may promote the formation of new bone tissue. In addition, the elastic modulus of magnesium is well-matched with that of natural bone, resulting in the reduction of stress shielding effect that can lead to bone loss around the implant.

Unlike traditional permanent implants, such as Ti alloys and stainless steels, biodegradable magnesium alloys will not cause permanent physical irritation or chronic inflammatory discomfort. Additionally, the density and mechanical properties of magnesium-based alloys are close to those of nature bone. The elastic modulus of magnesium alloys is about 45GPa and is much lower than those of stainless steels (~200GPa), Co-Cr alloys (~230GPa), and Ti alloys (~110GPa). Magnesium alloys can dramatically reduce the stress shielding effect induced by serious differences between the elastic modulus of implants and nature bones. Therefore, magnesium alloys have potential biomedical applications as biodegradable biomaterials.

It is well known that Magnesium and its alloys degrade in aqueous environments via an electrochemical reaction producing magnesium hydroxide and hydrogen gas. Especially in vivo where the chloride content of the body fluid is about 150 mmol/l (which has exceeded the critical concentration 30 mmol/l), the degradation rate is faster due to the magnesium hydroxide converting into highly soluble magnesium chloride. The rapid degradation rate of the magnesium-based implants in vivo has become the main limitation hindering their applications. Suitable strategies are thus required to be developed to tailor their degradation rates.

Figure 1 shows a comparative summary of the mechanical properties (compressive yield stress, σy,C, and Young’s modulus, E) of various families of materials that can be used as bioabsorbable implants, such as metallic alloys, biodegradable polymers and ceramics. From the correlation H ≈ C σy,C (where C is the so-called constraint factor and is normally close to 3 for crystalline metallic alloys and slightly higher for metallic glasses the mechanical hardness is observed to be directly proportional to σy,C.

The yield stress of Mg-Zn-Ca bulk metallic glasses is relatively large (Figure 1) thus indicating that they are one of the hardest biodegradable materials reported in the literature. Moreover, the values of Young’s modulus of glassy Mg-Zn-Ca are closer to that of cortical bone (Ebone = 3– 20 GPa) than most crystalline Mg-based alloys (they are also mechanically softer) and synthetic hydroxyapatites. Considering that the Mg70Zn23Ca5Pd2 alloy is fully crystalline, its hardness is also generally larger than that of most Mg-Zn-Ca crystalline alloys.

Compared with most Fe-based biodegradable alloys, Mg-based bulk metallic glasses are generally harder. Moreover, Fe-based alloys are typically ferromagnetic at room temperature (except the antiferromagnetic FeMn), which precludes their use in nuclear resonance imaging techniques for diagnostics purposes. The Young’s modulus of Mg72Zn23Ca5 becomes closer to that of Ca-based or Sr-based biodegradable metallic glasses after long-term immersion in HBSS as well as to that of polymeric materials reinforced with glassy fibers. At the same time, the hardness of Mg72Zn23Ca5 alloy is higher than that of all these materials. 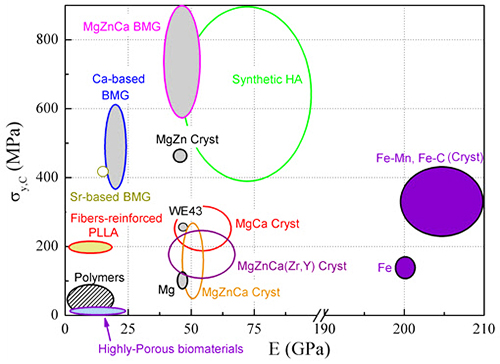