The corrosion of structural steel is an electrochemical process that requires the simultaneous presence of moisture and oxygen. Essentially, the iron in the steel is oxidized to produce rust, which occupies approximately six times the volume of the original material. The rate at which the corrosion process progresses depends on a number of factors, but principally the ‘micro-climate’ immediately surrounding the structure.

The electrolyte in atmospheric environments consists of a thin condensed film of moisture containing any soluble contaminants in the atmosphere such as acid fumes, chlorides etc. The formation of this film depends mainly on three important variables: temperature, relative humidity and the presence of dust particles in the atmosphere.

The characteristics of a moisture film on a surface are not necessarily the same as those of a bulk electrolyte. In a moisture film, the replenishment of dissolved oxygen is much greater than in bulk electrolyte, owing to the large ratio of surface area to electrolyte volume. Under conditions of lowered relative humidity, which permits rapid evaporation, convective mixing in the condensed layer further hastens the arrival of dissolved oxygen at the cathode. Both characteristics of the moisture film can result in an increase in galvanic corrosion rate.

Secondly, the electrolyte conductivity of the condensed layer parallel to the surface of the metal is low compared with that of the bulk electrolyte, even when it contains acid fumes or chlorides. This high electrolytic resistance of the thin condensed electrolytic layer has a controlling effect on the distribution of the corrosion. The galvanic attack will normally be highly localized and is rarely found much further than 25 mm from the bimetallic junction. The geometrical anode/cathode area ratio, which for a galvanic couple is an important factor in the observed corrosion rate, is of limited influence. The controlling effect of the electrolytic resistance is equally applicable to anode and cathode of the bimetallic couple. In general, it can be stated that in atmospheric bimetallic corrosion the active areas are small and approximately equal, regardless of the geometrical area ratios.

When two dissimilar metals are joined together and in contact with an electrolyte, an electrical current passes between them and corrosion occurs on the anodic metal. Some metals (e.g. stainless steel) cause low alloy structural steel to corrode preferentially whereas other metals (e.g. zinc) corrode preferentially themselves, thereby protecting the low alloy structural steel. The tendency of dissimilar metals to bimetallic corrosion is partly dependent upon their respective positions in the galvanic series. The further apart the two metals in the series the greater the tendency.

Another aspect that influences bimetallic corrosion is the nature of the electrolyte. Bimetallic corrosion is most serious for immersed or buried structures, but in less aggressive environments e.g. stainless steel brick support angles attached to mild steel structural sections, the effect on the steel sections is minimal. No special precautions are required in most practical building or bridge situations. For greater risk situations, gaskets, sleeves and similar electrically insulating materials should be used. Alternatively the application of a suitable paint system over the assembled joint is also effective. 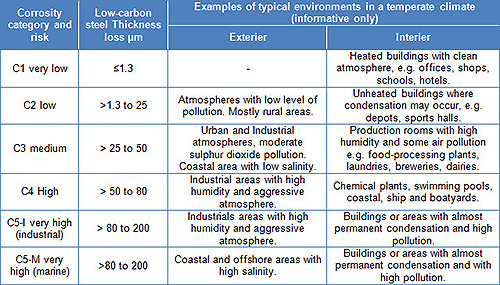 Bimetallic corrosion can be prevented by the application of dielectric insulating materials between dissimilar metals. For example, if dissimilar plates are bolted together, plastic or rubber washers may be used to insulate the metals, Dielectric unions separate and insulate dissimilar plumbing components.

In order for Bi-metallic Corrosion to occur there are three conditions that must exist or the process of corrosion will not begin under any circumstance.

If any one of these three conditions does not exist, bi-metallic corrosion will not occur.