The control of hydrogen content in steels is an important task of steelmakers because of its generally detrimental effects on processing characteristics and service performance of steel products. Just a few parts per million of hydrogen dissolved in steel can cause hairline cracks (flakes), hydrogen embrittlement, hydrogen blistering and loss of tensile ductility, particularly in large steel castings ingots, blooms and slabs.

Hydrogen has been and always will be a source of various problems within steel production because of its generally detrimental effects on processing characteristics and service performance of steel products. If the hydrogen content of the molten steel exceeds the solubility limit of hydrogen in solid iron, the hydrogen will be rejected during solidification, and this leads to pinhole formation and porosity in steel. Just a few parts per million of hydrogen dissolved in steel can cause hairline cracks (flakes), hydrogen embrittlement, hydrogen blistering and loss of tensile ductility, particularly in large steel castings ingots, blooms and slabs.

According to Sievert’s law, a di-atomic gas reacts with a metal and is dissolved into atomic form. In the case of hydrogen solubility, data are summarized by the following equations and are shown graphically in Fig 1.

The equilibrium constant of reaction (1) is:

Figure 1: Solubility of Hydrogen in pure iron or low-alloy steel at 1 atm pressure of H2

The temperature dependence of K in iron in equilibrium with pH2 = 1 atm is as follows for α, δ(bcc) iron, γ(fcc) iron and liquid iron (I) are given by the following equations:

where the temperature T is in degrees Kelvin.

During rapid cooling of a heavy-section steel casting, e.g. thick slab or bloom, there will be little diffusion of H out of casting. Because of the hydrogen solubility decreases with a decreasing temperature, there will be a build up of H2 pressure in the steel matrix during rapid cooling. For the limiting case of no hydrogen diffusion, the H2 pressures will be as shown below in the steel containing 2, 4 and 8 ppm H.

Table 1: Build up of H2 pressure in the steel matrix during rapid cooling

Numerous sources of hydrogen exist during the melting, the ladle processing and the casting operations. Hydrogen pickup in the steel is primarily due to the water associated with the slagmaking materials and as an impurity in the alloy additions and the carburizers. Hydrogen is generally not a problem in the BOF steelmaking except in the bottom blown converters (Q-BOP) where natural gas (CH4), used as a tuyere coolant, is the major source of hydrogen.

The lime, e.g. calcium oxide (CaO), is an important addition during steelmaking operations, especially during ladle metallurgy to adjust slag chemistry, to facilitate inclusion removal and for desulphurization of steels. Due to the moist atmospheric conditions, lime can become hydrated to form calcium hydroxide. This hydrated lime when added to the liquid melt decomposes according to the reaction

Figure 2, 3 and 4 show results of experiments performed in laboratory and on the industrial scale to investigate the effect of both calcium hydroxide and coke addition on the hydrogen content in carbon steels.

All figures show the variation of hydrogen pickup as a function of additional Ca(OH)2 and coke. In Figure 2 showed results where is the Ca(OH)2 was added on top of the liquid metal while in Figure 3 showed results of case that the calcium hydroxide was added along with the CaO-Al2O3 slag. Figure 4 shows the effect of metallurgical coke addition on the hydrogen content of low carbon steel. 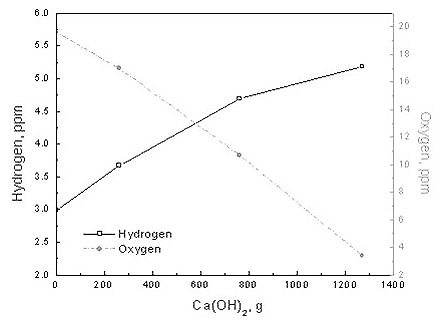 Figure 2: Hydrogen pickup due to Ca(OH)2 addition on the top of the slag 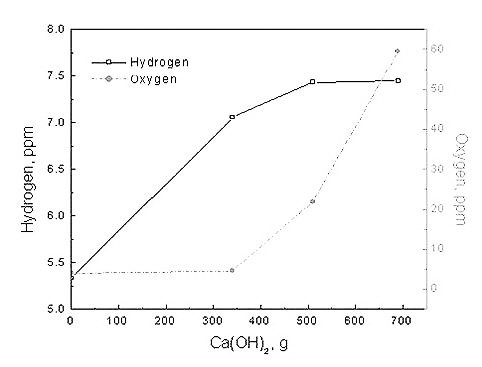 Figure 3: Hydrogen pickup due to Ca(OH)2 addition along with the CaO-Al2O3 slag 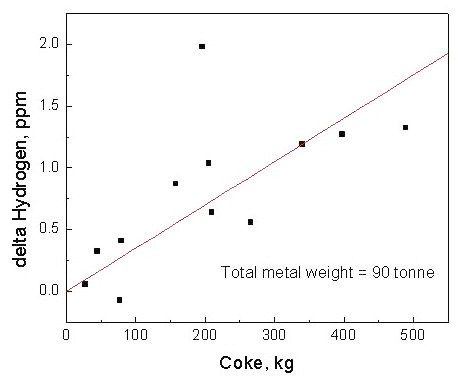 Figure 4: Change in the hydrogen content of the liquid metal as a function of coke addition for 90 tone heat

The control of hydrogen content in steels is an important task of steelmakers during BOF and EAF steelmaking. The control of the pickup of hydrogen must include the use of inputs with low moisture or hydrogen content, avoidance of late addition of lime during smelting process, minimization of carry over slag, efficient degassing at deep vacuum and intense purging, recarburization with low hydrogen pet coke, control of ladle slag basicity etc.